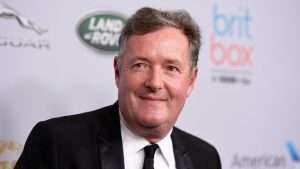 “Following discussions with ITV, Piers Morgan has decided now is the time to leave Good Morning Britain,” the network said in a statement.

“ITV has accepted this decision and has nothing further to add.”

Morgan has been a vocal critic of Markle ever since she cut off contact with him after she met Prince Harry, and he launched a scathing attack on her following the couple’s interview with Oprah Winfrey.

The former CNN host said he did not believe Markle when she said at one point she “didn’t want to be alive anymore”, sparking a deluge of complaints.

Barely a day after his remarks, regulator Ofcom said that it had already received more than 41,000 complaints.

Morgan also stormed off the set on Tuesday morning after clashing with fellow presenter Alex Beresford over the interview.

Beresford told Morgan “I understand you’ve got a personal relationship with Meghan Markle, or had one, and she cut you off.

“She’s entitled to cut you off if she wants to. Has she said anything about you since she cut you off? I don’t think she has but yet you continue to trash her,” he added, leading to Morgan’s departure.

Morgan has also been the most outspoken media critic of the government’s handling of the coronavirus pandemic over the past year, leading to many high-profile rows with ministers.

Morgan hosted his CNN show for three years until it was axed due to falling ratings in 2014.

He irked US gun owners after launching a crusade for greater gun control and struggled after stepping into the shoes of popular host Larry King in the coveted 9:00 pm primetime slot.