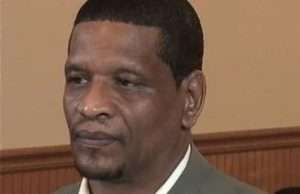 The incident happened around 1:15 p.m. in an apartment building on Parkside Ave. near Flatbush Ave. in Prospect-Lefferts Gardens, near the southeast corner of Prospect Park, police said.

According to the Department of Buildings and police, assistant superintendent Kennie Lessie, 64, and a tenant entered the elevator machine room in the basement to find a cell phone that had apparently fallen down the shaft.

The elevator was in the basement at the time, but was then called to another floor, at which point Lessie was “caught in the moving hoist ropes and elevator sheave.” The sheave is the circular device around which the ropes move.

The 36-year-old tenant suffered minor injuries to his finger when trying to free the victim, authorities said.

Eddie Adis, the head superintendent of the 126-unit complex, told the Daily News he checked the basement after tenants alerted him of a loud noise.

“He was crushed,” said Adis, who was still shaken later Friday by the sudden death of his colleague.

Medics rushed Lessie to Kingsbrook Jewish Medical Center but he could not be saved.

“He was a good man. He died trying to help a tenant,” Adis said.

Lessie had worked in the building for nearly 30 years, and took the job after coming to New York from Grenada in 1992, his mourning wife Allison Williams said Friday night.

“He was a hard worker who liked to fix things. He thought of everyone else first,” Williams said. “He was a wonderful husband, father, uncle and friend.”