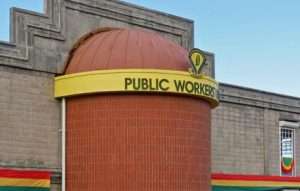 PR – The Government of Grenada has once again shown that it has no regard and respect for hard  working Public Officers with the latest hiring of another political operative.

How can we truly trust our employer, the Government of Grenada when they tell our members, workers and their representative unions that there is a drastic reduction in revenue collection and  there is a freeze on hiring in the Public Service.? However, less than one week after debating the  bill in Parliament, they have done the complete opposite. Government has hired former Tourism  Minister, Alexandra Otway-Noel, as an Advisor to Prime Minister, Dr. Keith Mitchell.

This is a slap in the face to all Public Officers, especially to our many contract workers who are  awaiting Permanent Public Service Commission appointments. It is also a slap for our many  Public Officers, who are retiring into poverty and especially our Pensioners who were not  allowed to retire in dignity.

Grenada Public Workers’ Union is calling on our employer the Government of Grenada to  honour its legal obligations to Public Officers and pay our 4% salary & wage increases. This is  gross disrespect for our laws and demonstrates the dishonorable nature of our employer in failing  to honour a legal right.

Members, workers, please be advised that on Tuesday, March 2ndyour union the Grenada Public  Workers’ Union (GPWU) along with the Grenada Technical and Allied Workers’ Union (GTAWU) wrote to the Labour Commissioner, Mr. Cyrus Griffith to seek to achieve payment of  our legally earned 4% and to secure permanent appointment of our many contracted members.

Our employer seems to be only interested in fulfilling its political agenda. Workers interest is not  a priority to our employer but its political agenda appears to be always given center stage when  we Public Officers and workers must settle for the story that Government does not have the  financial resources to pay. How can we ever trust our employer? Action speaks louder than  words.

It is time for our employer, the Government of Government to honour its commitment to Public  Officers and stop the discrimination to Contract workers. Workers’ Rights must be respected.

We must and shall overcome.