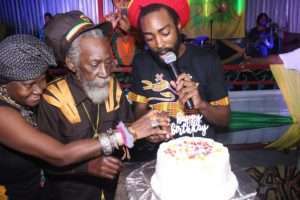 According to Wailer’s son, Abijah Asadenaki Livingston, Wailer’s stroke, which was the second in two years, was caused by the stress of his wife, Jean Watt aka Sis Jean’s disappearance.

Sis Jean went missing on May 23, 2020. The Jamaica Constabulary Force, made an appeal to the public that same week, describing the 70-year-old as “of dark complexion, slim build” and “about 5 feet tall”.

Wailer’s family later issued a public statement on Watt’s disappearance, stating that they were praying for her return.

“Hail Jah Rastafari, someone I love is missing and my thoughts are racing into fear and panic. I surrender all of my fearful thoughts to you. I call upon your perfect wisdom to guide everything to ensure the complete safety and protection of my loved one. Please take my fearful thoughts from me and heal them for me,” the statement read.

Two months after Watt’s disappearance, Wailer suffered a second stroke which made him “medically incapacitated”.

It was then that Wailer’s son said he became suspicious of his father’s most recent manager, Maxine Stowe.

In a statement on March 2nd denouncing all dealings with Stowe, Abijah Livingston stated, “I have worked closely with my father and his manager for many years. However, since the disappearance of Jean Watt aka Sis Jean, my father’s wife of over 50 years on May 23, 2020, I have become suspicious of Maxine’s behavior. While I have not said anything publicly to date, I have made my suspicions known to her and the police.”

According to Livingston, Stowe had declared herself to be Wailer’s spouse, “even while my father’s wife of over 50 years is still missing.”

Livingston stated further that following his father’s stroke, Stowe had been acting on his family’s behalf and making decisions without his or his siblings’ consent.

He said that he was recently notified that Stowe had re-launched his father’s solo music catalouge, a move that was never finalized while Wailer was still functioning. He also said Stowe never made contact with any member of the Wailer estate to do so.

In the lengthy Facebook post, Livingston said that “any organization conducting business with Maxine Stowe must know that she is acting on her own agenda as I have not been consulted, neither has my siblings.”

He also asked the public to keep the Livingston and Watt families in their prayers as they mourn Bunny Wailer and continue the search for Jean Watt.