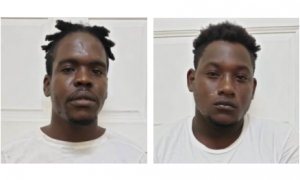 PR – Kevin Phillip alias Gath, 28 years, Fisherman and Shamar Langdon, a 24 year old Bartender, both of Paradise, St. Andrew, who were arrested and charged by Officers of the Drug Squad Unit on Monday 1st March, 2021, appeared at the St. George’s # 3 Magistrates Courts on Thursday 4th March, 2021.

Phillip and Langdon were charged for the offence of Trafficking a Controlled Drug to wit two hundred and ninety-two (292) pounds of Cannabis.

Langdon was granted bail in the amount of eighty-five thousand dollars ($85,000.00) with two (2) sureties. He is to surrender all his travel documents, and must request permission from the court to travel. While Phillip was remanded to her Majesty’s Prison. They will reappear in court on March 10th, 2021.