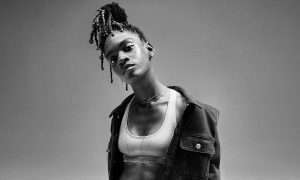 It’s March 2021, spring is upon us, and Koffee is gracing us with another surprise new corporate endorsement deal while showing some skins while she’s at it. The reggae/dancehall crooner is known to wear ample often baggy clothing, so being an underwear model will come as a huge surprise for her fans who are already reacting to her post on her Instagram page.

She compliments the fit with a Calvin Klein denim jacket with socks and sneakers, showing off her toned legs and abs. The pint-size dancehall star has always maintained her toned physique, but for the first time, her fans get a glimpse of it.

Last year, Koffee signed endorsement deals with Nike/Jordan and MasterCard, which saw her becoming brand ambassadors for both Fortune 500 companies. The singer attributes her success in winning over corporate companies to her positive music and attitude. This, she revealed, has also help Jamaica on the global stage.

“The positivity that I put in my music has put me on the map, has helped me to put my country even more on the map, has brought me across the world and showed me a lot of different things,” she said. “So, that’s something that I wish to continue to hold at the forefront of what I represent.”

While speaking about her deal with Jordan in November last year, Koffee opened up about self-love and exuding confidence in herself. “Confidence begins with self-love and self-belief. I don’t really know how to tell somebody to love themselves, necessarily, but even me, I have to find a way to love myself, to emit love into the world,” the singer said.

Aside from stacking up on endorsement deals, Koffee continues to see major success locally and worldwide with her music. She told Rolling Stone that her sophomore album will be about bringing people together and finding solutions to problems. Positivity will continue to be a major theme of her music.

With a Grammy Award under her belt, she is looking to add another when she released her second album later this year. While we await new music, we’re still bumping her previous releases of timeless joints like “Lockdown,” “Pressure,” and her mega-hit “Toast.”