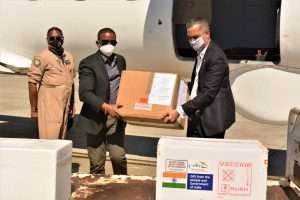 (OECS) – The Heads of Government of the Organisation of Eastern Caribbean States (OECS) announced the arrival of one hundred and twenty-five thousand (125,000) doses of the Oxford-AstraZeneca vaccine donated by the Government and People of India.

This shipment arrived at the V.C Bird International Airport in Antigua and Barbuda on Monday 1st March 2021 around 8:30 am. It follows a previous shipment received less than two weeks ago by Barbados and Dominica (who received 70,000 doses, a significant portion of which was shared with other OECS Member States).

Chairman of the Authority of the Organisation of Eastern Caribbean States, Prime Minister Hon Roosevelt Skerrit, and all of the Prime Ministers, have collectively and individually expressed their profound appreciation to the Government and People of India, and in particular to Prime Minister Narendra Modi, for their generosity and solidarity in donating these vaccines. India has been one of the first G20 countries to donate vaccines to developing countries and it now has a list of over 100 countries awaiting supplies provided by India.

The OECS Heads of Government committed that Member States will be leveraging their bilateral diplomatic relations as well as sharing critical resources to ensure that every Member State is equipped to fight the COVID-19 pandemic.

Director General of the OECS, Dr. Didacus Jules, is confident in the established cooperation of Member States and its partners to helping the region in this battle against the novel coronavirus.

“I would like to express our deepest appreciation, not just to the Government of India for the shipment of vaccines, but also to the Regional Security Service [RSS] for their extraordinary effort in helping with the distribution of the vaccines to all OECS Member States in a quick and timely manner. To the Eastern Caribbean Central Bank [ECCB], we thank you for paying for the charter to get the vaccines where they needed to go. We also express appreciation to the French and British Governments for their attention to their territories who are Associate Members of the OECS by ensuring that their vaccines needs are fully met.”

On 17th February the UN Secretary General Antonio Guterres revealed that 10 countries on the planet have administered 75% of all vaccinations and he demanded a global effort to ensure that everyone in every country has access to the vaccine. He noted with concern that 130 countries across the world had not received a single dose of the vaccine.

In this context, the OECS Member States are continuing strenuous efforts as Small Island Developing States whose vaccine needs are miniscule in the scale of global demand to ensure that we are front of the line in vaccine support from all internationally approved vaccines.