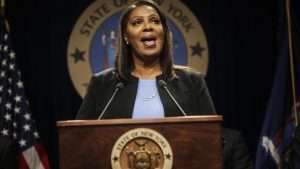 (CMC) — New York Attorney General Letitia James has filed a lawsuit against a company that helps secure immigration bonds, for allegedly preying on vulnerable Caribbean and other immigrants.

In a lawsuit filed against Libre by Nexus and its parent company, Nexus Services, James, as part of a coalition that includes the United States Consumer Financial Protection Bureau (CFPB) and the attorneys general of Massachusetts and Virginia, alleges that the company preys on Caribbean and other immigrants held in US federal detention centres by offering to pay for their immigration bonds to secure their release, while concealing or misrepresenting the true nature and costs of its services.

James said on Monday that Libre charges large upfront fees and hefty monthly payments, which typically amount to thousands of dollars more than the face value of the bond.

She said Libre also markets its services to the friends and family members of detainees, who are desperate to secure their loved one’s release and also pay some of the exorbitant fees.

“Immigrant communities serve as the lifeblood of this nation, yet Libre by Nexus exploited their fears and targeted our state’s most vulnerable,” said James.

“This lawsuit should send a clear message to all who seek to exploit and take advantage of our most helpless communities that we will use every tool in our arsenal to end your unlawful activity and the suffering you inflict,” the Attorney General added.

The complaint — filed in the US District Court for the Western District of Virginia — alleges that the defendants have and continue to violate several laws, including the Dodd‐Frank Wall Street Reform and Consumer Protection Act’s prohibition on deceptive and abusive acts and practices, as well as the states’ consumer protection laws.

In particular, the complaint alleges that Libre “shackles its clients with GPS devices that cannot be removed”.

“The bulky devices can cause physical harm and irritation and often fail to function,” it says.

The complaint also charges that Libre “requires consumers to sign confusing and misleading contracts that they present to consumers only in English, even though a vast majority of Libre’s clients do not speak or read English and do not understand it”.

In addition, the complaint claims that Libre “mischaracterizes its financial services as a ‘program’ by boasting that it offers ‘wraparound services,’ including free legal services.

“But, in reality, Libre provides nothing more than a referral to lawyers for its clients, who may receive no legal services at all,” the complaint states.

It accuses Libre of misleading consumers into believing that their monthly fees are paying down their bond as a debt owed to Libre and will be refunded at the conclusion of their immigration proceedings.

“But, only later do many consumers discover that Libre will not refund thousands or tens-of-thousands of dollars in fees,” the complaint alleges.

To collect fees, James said Libre creates “the false impression that it has associations with US Immigration and Customs Enforcement (ICE) or other government actors and that failing to pay fees to Libre can lead to arrest or deportation”.

The lawsuit also names Libre’s principals — Micheal Donovan, Richard Moore and Evan Ajin — “who devised the company’s business model, and currently implement it, direct its operation, and know the details of its workings”.

James said the lawsuit seeks to put an end to the company’s illegal practices, obtain millions of dollars in restitution for the thousands of victims and impose penalties on the companies.