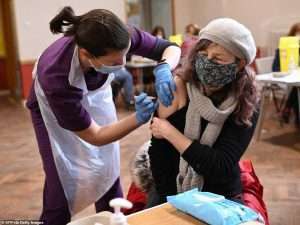 (DAILY MAIL) – Just one vaccine shot reduces the risk of being hospitalised by Covid-19 by more than 90 per cent, according to stunning new findings.

Public health officials have told Ministers that the remarkable results apply for both the Pfizer and Oxford-AstraZeneca vaccine, with the British jab proving slightly more effective.

It represents another huge boost to Britain’s world-beating vaccine rollout, which has now achieved nearly 20 million first injections. The hugely successful inoculation programme is threatened only by the small minority who are still refusing to have the jab.

Yesterday Prince William urged Britons to ignore conspiracy theories about the supposed dangers of the vaccine, warning of ‘rumours and misinformation’ on social media. The Duke of Cambridge issued the warning during a video call with his wife Kate to two clinically vulnerable women who have been shielding with their families since March.

A Mail on Sunday investigation into the poor take-up among some ethnic minorities today finds people are falling for lies and conspiracy theories spread online.

The new one-dose vaccination figures were calculated by comparing Covid hospitalisation rates in those who have received their first dose with those of a similar age who haven’t.

It helps to explain why the numbers being hospitalised are falling so rapidly in the oldest age groups.

Deaths among the over-75s have dropped by 40 per cent, while the number of over-85s being admitted to intensive care units with Covid has dropped close to zero.

The strong results for the Oxford vaccine are a rebuke to the German authorities, which last month advised against its use in the over-65s.

The Duke of Cambridge’s remarks on vaccinations come after the Queen suggested last week that it was selfish to refuse a jab.

William and Kate spoke to mother of two Shivali Modha, who has type 2 diabetes, and said she was anxious about her vaccine after reading claims on social media.

In a video call, the Duke told her: ‘Catherine and I are not medical experts by any means but if it’s any consolation we can wholeheartedly support having vaccinations. It’s really, really important.

‘We’ve spoken to a lot of people about it and the uptake has been amazing so far.

‘We’ve got to keep it going so the younger generations also feel that it’s really important for them to have it.

‘So it’s great that, Shivali, you’re taking the time to work it out and come to the conclusion that “I need to do this” because social media is awash sometimes with lots of rumours and misinformation, so we have to be a bit careful who we believe and where we get our information from. Especially for those who are clinically vulnerable as well, it’s so important that those vaccinations are done, so good luck.’

The Duke and Duchess also spoke to Fiona Doyle, 37 – an asthma sufferer – and her seven-year-old daughter Ciara, who have been shielding at home in Finchley, North London, since the crisis began.

She spoke of her anxiety ‘knowing that there was this virus out there that was incredibly dangerous for me. It was really difficult.’

The challenges facing the NHS were made clear by one GP who told the MoS of his battle to persuade one of his surgery’s receptionists to have the inoculation.

The doctor, who works at a busy South of England group practice which is co-ordinating vaccinations for the local area, explained: ‘She said that she didn’t want to have it.

‘So one evening I sat down with her and talked through her concerns for 20 minutes. I explained all about how rigorously the vaccine had been tested, how safe it is and how important it was that as many people as possible have it.

‘Not to mention the fact that she was working at a surgery where we are seeing lots of elderly and vulnerable people every day.

‘But there was just no convincing her. She told me that the vaccine was something “foreign” and she didn’t want it going in her body. And that was the end of that.’

A survey by the Harrow Association of Somali Voluntary Organisations suggested only half of its community plan to take the vaccine – even though more than three-quarters knew someone who had died from the disease and barely any doubted its dangers.

Organisers said they were shocked by the results.

Meanwhile, 60 of Britain’s predominantly black churches will use services today to urge their congregations to have jabs. Leaders, some of whom have already been inoculated, will join forces to urge worshippers to seek out the facts from trusted sources.

It is even better than the Pfizer jab at stopping people getting so sick that they need to be admitted to hospital, Ministers have been told.

A single shot of either jab cuts the chance of needing hospital treatment by more than 90 per cent, ‘real world’ results from the NHS vaccination programme show.

But the Oxford-AstraZeneca vaccine, shunned by millions across Europe because of concerns over trial data, is proving slightly more effective at stopping severe Covid-19 illness than the Pfizer jab.

Its apparent superiority even holds among over-70s, The Mail on Sunday understands, vindicating the UK drug regulator’s decision to approve it for use in older people.

The results are a massive boost not just for Oxford and AstraZeneca, but also the Government. Ministers have ordered 100 million doses, making it the workhorse of the NHS vaccination campaign.

The landmark results will add to growing confidence that vaccination is breaking the link between infections and deaths.

The figures were calculated by comparing Covid hospitalisation rates across England in those who have received a first dose of vaccine in the NHS rollout, to those of a similar age who have not.

They follow a Scottish study of Covid hospitalisation rates, published last week, which came to similar conclusions. Edinburgh University researchers found that by the fourth week after injection, ‘the Pfizer and Oxford-AstraZeneca vaccines were shown to reduce the risk of hospitalisation from Covid-19 by up to 85 per cent and 94 per cent, respectively’.

Among over-80s, who are at highest risk of severe illness, a single dose cut the risk of needing hospital treatment by 81 per cent from week four onwards, when the results from both types were combined.

Well-placed sources said the larger English study found hospitalisation rates in over-70s were slightly lower among recipients of the Oxford vaccine than those who got the Pfizer drug. Last month, German authorities advised against using the Oxford vaccine in over-65s, citing lack of evidence of effectiveness from formal trials. The trials were dogged by low numbers of older volunteers.

French President Emmanuel Macron then caused consternation by falsely claiming the Oxford vaccine was ‘quasi-ineffective’ for over-65s – although he has since rowed back by saying he would have it.

In a subtle riposte to European critics, Professor Sarah Gilbert, who spearheaded Oxford’s Covid vaccine project, said real-world data ‘now provides evidence of high effectiveness of both the Oxford-AstraZeneca and BioNTech-Pfizer vaccines in preventing hospitalisation in people over the age of 80, after a single dose, supporting our confidence in using this vaccine in adults of all ages.’

The results are already having a stunning impact on Covid statistics, which show hospitalisations and deaths falling fastest among Britain’s oldest people. Deaths in over-75s – almost all of whom have now had their first jab – fell 40 per cent in the last week. By contrast, they fell 23 per cent in under-65s, who remain largely unvaccinated. The number of Covid admissions to intensive care units among over-85s has also dropped to near zero in the last couple of weeks, Public Health England reports indicate.

In another boost for Oxford, new evidence also indicates one dose of its vaccine provides more durable protection. Updated trial results show that from three weeks to three months after first dose, the vaccine was 76 per cent effective at preventing symptomatic infection and ‘protection did not wane’.

Protection from one Pfizer dose dipped from 84 per cent five weeks after injection, to 58 per cent after more than six weeks.

Last night it emerged that Germany is reconsidering its recommendation on the Oxford vaccine.

He also lamented the fallout from their January decision, saying they ‘never criticised the vaccine’, only the lack of data in over-65s.

He added: ‘However, the whole thing went somehow bad.’