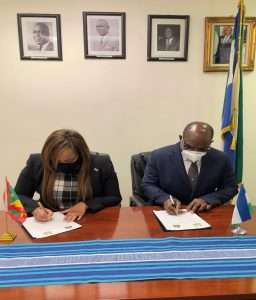 PR –  Her Excellency Ms. Keisha A. McGuire, Ambassador and Permanent  Representative of Grenada to the United Nations, and His Excellency H.E. Mr. Alie Kabba,  Ambassador and Permanent Representative of the Republic of Sierra Leone to the United  Nations, signed a Joint Communiqué to establish diplomatic relations between Grenada and  the Republic of Sierra Leone.

In accordance with Grenada’s foreign policy, the establishment of diplomatic relations with  Sierra Leone further echoes the re-energising of strengthening friendly relations and  cooperation with other States.

The signing of the Joint Communiqué further complements the actions of the Caribbean  Community (CARICOM) and the African Group’s initiatives for enhancing relations between the  two regions.

The two States have been working closely at the United Nations, as Bureau Members of the  Special Committee on the Situation with regard to the Implementation of the Declaration on  the Granting of Independence to Colonial Countries and Peoples (Committee of 24 or C24) and  in other intergovernmental processes and look forward to deepening existing ties in the  political, economic, cultural and humanitarian fronts.