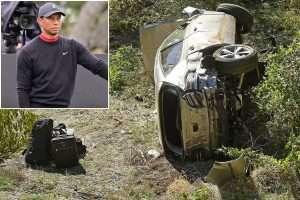 (NEW YORK POST) – Tiger Woods has no memory of the accident that left him with a shattered right leg — and appeared to be unaware of how badly injured he was when the first deputy arrived at the scene, according to reports.

“At the hospital he was asked about it by the investigators and he had no recollection of the crash itself,” LA County Sheriff Alex Villanueva told CNN, according to the Times of London.

Sheriff’s Deputy Carlos Gonzalez, who arrived first at the scene, told NBC’s “Today” on Wednesday that the golfing legend was calm, but appeared to be unaware of how badly he was hurt.

“I don’t think he was aware of how gravely he was injured at the time. It could be a mixture of adrenaline, it could’ve been shock,” Gonzalez said.

“Again it was very quick, the moment that I arrived from the moment that he rolled over, so I don’t know if he had time to fully assess his injuries,” added Gonzalez, who arrived six minutes after a 911 call was made.

The deputy said he did not see any signs of impairment at the site.

“At the scene, we’re looking for evidence of intoxication like if there’s an odor of an alcoholic beverage or there’s an open container or prescription medication,” he said.

“At this time we didn’t see any evidence of impairment and anything beyond that in terms of the medical toxicology, I wouldn’t be aware at this time,” Gonzalez added.

He said the 45-year-old golf icon remained calm as he asked him assessment questions before determining that he needed to call the fire department to help extricate him.

“I’ve seen collisions that didn’t look as serious where the occupants were injured much more severely,” he said. “I think that’s just a testament to the fact that he was wearing a seatbelt, airbags worked as intended and modern vehicles are much more safe than they ever used to be.”

Gonzalez was wearing his body camera while interacting with Woods and the footage should be available in the near future, according to USA Today.

Woods faces a long road to recovery that includes extensive physical therapy and additional operations on his shattered leg, medical experts have told The Post.

Villanueva reiterated Wednesday that there was no indication of criminal wrongdoing as he announced that no charges are being considered in the accident.

Asked about the possibility of a reckless driving charge, Villanueva said there was no evidence Woods’ crash met the criteria.

“A reckless driving charge has a lot of elements into it,” he said. “This is purely an accident.