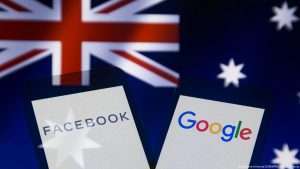 Both tech giants have already agreed multi-million-dollar deals with some of Australia’s biggest news companies – and more negotiations are under way.

The bill passed on Thursday with bipartisan support after the government made some last minute changes when Facebook blocked news in Australia in protest.

The changes give the tech companies extra time to negotiate deals with publishers and allow them to dodge the rules if they make a ‘significant contribution’ to journalism by handing over enough cash.

Facebook agreed to re-instate Australian news pages after the amendments were announced on Wednesday.

Critics said the government had ‘buckled’ to bullying from Facebook CEO Mark Zuckerberg but Rod Sims, the head of the country’s competition watchdog, said the changes simply clarified some of Facebook’s ‘misconceptions’.

‘If what the government’s done is give things that mean a lot more to Facebook than they do the government, then that’s how good deals are done,’ he said.

‘Thankfully, after further discussion, the Australian government has agreed to changes that mean fair negotiations are encouraged without the looming threat of heavy-handed and unpredictable arbitration,’ he wrote in a blog post.

Australia’s new law was designed to tackle the huge power imbalance between big tech companies which dominate their markets and soak up the lion’s share of advertising revenue by forcing them to pay for the news content they host and reveal some of their closely-guarded algorithms and data.

Google and Facebook had led opposition to the changes, fearing it would create international precedent that would threaten their business models.

Initially, Google threatened to pull its search engine from Australia altogether – but backed down last week and began doing deals with media outlets.

The ban even brought down the site’s own page for a short time.

Facebook agreed to restore news and negotiate deals similar to the ones Google has struck, but will do so with increased bargaining power after changes were agreed.

Google has been told about the changes and has described them as ‘sensible.’

Facebook and Google still face the prospect of having to agree deals with media around the world, as the European Union, Canada and other jurisdictions move to regulate the sector.

Since their emergence around the turn of the century, Google and Facebook have been largely unregulated and have grown into two of the world’s largest and most profitable companies.

But a string of scandals about misinformation, privacy violations, data harvesting and their virtual monopoly on online advertising has triggered the attention of watchdogs.

For every $100 spent by Australian advertisers online today, $49 goes to Google and $24 to Facebook, according to the country’s competition watchdog.

Critics of the law have said it is punishing successful companies and amounts to a money grab by struggling but politically connected traditional media.

They also lament that there is no requirement in the law that money gained by the media companies from Facebook and Google be spent on expanding public interest journalism rather than just boost profits.

Thousands of journalism jobs and scores of news outlets have been lost in Australia alone over the past decade as the sector watched advertising revenue flow to the digital players.

David Cicilline, a Democrat politician from Rhode Island in the US, even went so far as to say ‘Facebook is not compatible with democracy’ as users were also urged to give up Instagram and WhatsApp because Facebook owns them.

British MP Julian Knight said Facebook appeared to be using Australia as a ‘test case’ for how democracies would react to having news banned, and called for legislators around the world to bring the tech giant ‘to heel’.

Among those urging users to delete the app was Stephen Scheeler, former Facebook Australia CEO, who slammed the ‘alarming’ move and accused Mark Zuckerberg of being motivated by ‘money, power, and not [by the] good.’

Critics also said Facebook’s ban would lead to the proliferation of conspiracy theories and misinformation – which the platform claims to be tackling.

Instead of seeing posts from the social media giant, users clicking on its own Facebook page were instead met with a message saying ‘no posts yet’.

In a spectacular case of buck-passing, Facebook then attempted to blame the errors on the Australian government, saying it mirrors the ‘broad and vague’ definition of ‘news’ in its new law.

Mr Frydenberg and Communications Minister Paul Fletcher drew up Australia’s law after a three-year inquiry by Australia’s competition regulator, the ACCC, which found Google and Facebook have ‘an imbalance in bargaining power’ when dealing with news companies.

The code was intended to apply to Facebook NewsFeed and Google Search – but other services such as Instagram and YouTube can be added if a bargaining power imbalance arises.

In addition to payment for content, the measures would also force transparency around the closely guarded algorithms that tech firms use to rank content.

The code will require Google and Facebook to give publishers 14 days notice of any algorithm changes that are likely to have a significant impact on their traffic.

Under a two-way value model, the payment for content would take into account the value that Google and Facebook provide to news organisations by driving traffic to their sites.