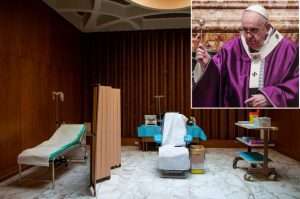 (NEW YORK POST) – The Vatican issued a decree saying employees who do not get the COVID-19 vaccine would lose their jobs, before walking back the statement amid widespread criticism.

The Feb. 8 edict by Cardinal Giuseppe Bertello, the governor of Vatican City, said that workers who refused to get a vaccination without sufficient reason would be subject to a 2011 law that calls for “varying degrees of consequences that could lead to dismissal.”

Thousands of workers commute to the small city-state from Italy, and many Italians took to social media to slam the order, calling it unmerciful, and at odds with the teachings of Pope Francis.

On Thursday night, Bertello said that “alternative solutions” would be found for government employees who refuse to get the vaccine.

Some anti-abortion advocates have ethical objections to coronavirus vaccines that were created using stem cells.

In December, Vatican officials endorsed COVID-19 inoculations in a statement that read: “It is morally acceptable to receive Covid-19 vaccines that have used cell lines from aborted fetuses in their research and production process.”

Pope Francis received his first shot alongside former Pope Benedict in January when the Vatican rolled out its COVID-19 vaccination program.

The frail Catholic Church leader has required journalists that cover his trip to Iraq next month to receive the vaccine.

Only about 800 people live in the 108 acre nation, which has seen fewer than 30 coronavirus cases since the start of the pandemic; most of them among the Swiss Guard, who live in a communal barracks.