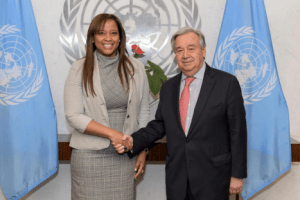 PR – Grenada’s Ambassador and Permanent Representative of Grenada to the United Nations, Her  Excellency Keisha A. McGuire, has been re-elected by acclamation as C24 Chair for the 2021 term.

Her re-election came on 18 February 2021, at the Organizational meeting of the Special  Committee on the Situation with regard to the Implementation of the Declaration on the  Granting of Independence to Colonial Countries and Peoples (Committee of 24 or C24), which  was presided over by Ms. Rosemary A. DiCarlo, the United Nations Under-Secretary-General for  Political and Peace-building Affairs.

As Chair of the Committee, Ambassador McGuire will oversee meetings and field activities  related to decolonization.

During the Meeting, Ambassador McGuire recommitted the determination of the Committee to  “pursue suitable means for immediate, full and speedy implementation of the Declaration on the  Granting of Independence to Colonial Countries and Peoples.” Noting that “we entered the first  year of the Fourth International Decade for the Eradication of Colonialism,” Ambassador McGuire called on “all the Member States to renew their commitment, to strive to make this the last  decade to be observed.”

To note, Antigua and Barbuda, Dominica, Saint Kitts and Nevis, Saint Lucia and Saint Vincent and  the Grenadines are also members of the Committee.

Since joining in December 1992, Grenada is chairing the United Nations Special Committee on  Decolonization for a third time, under the stewardship of Ambassador McGuire.