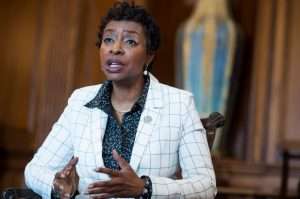 The Act is in keeping with US President Joe Biden’s “bold, inclusive and humane” plan for the future of the United States immigration system, opening up a pathway to citizenship for millions of Caribbean and other immigrants.

“I am the daughter of Jamaican immigrants, and I am uniquely familiar with the need for comprehensive immigration reform,” said Clarke, who represents the predominantly Caribbean 9th Congressional District in Brooklyn, New York. “As chair of the Congressional Black Caucus Immigration Task Force, I have seen the glaring inequities, blatant racism, vicious xenophobia, and civil rights violations immigrants face, particularly in immigrant communities of African descent.

“This bill is the Biden-Harris administration’s vision to fix our immigration system once and for all. The time has come for the values of our nation to be reflected in our immigration policies. I am proud to co-lead this paramount legislation,” Clarke continued.

The legislation would provide millions of hardworking, undocumented Caribbean and other immigrants a pathway to earned citizenship, including Dreamers, Temporary Protective Status (TPS) recipients and “essential workers who have made enormous sacrifices during the pandemic.”

Additionally, the legislation would also equip the country to “responsibly and effectively manage the border with smart and effective investments”; address root causes of migration that force people to leave Central America; and restore the United States’ commitment to human rights.

“I am deeply proud to introduce the US Citizenship Act in the House of Representative today, a vision that provides long-overdue permanent protections, and restores humanity and American values to our immigration system,” said Congresswoman Sánchez, who represents California’s 38th District.

“I am the daughter of immigrant parents from Mexico; this is personal to me,” she said. “I have dedicated my career to building an immigration system that lets people live without fear, and a system that gives immigrants – like my parents – who sought a better life and contribute to our nation a fair opportunity to thrive.

“After all, immigration reform isn’t just about policy changes and politics-as-usual; it’s about people: our loved ones, friends, and neighbours who have been living in our communities and contributing to our country for decades,” Sánchez added. “They deserve real relief.

“With President Biden’s leadership and vision, Democratic majorities in both Chambers, and the support of the majority of Americans, this is our moment to finally deliver big, bold, and inclusive immigration reform that our nation and its people deserve,” she continued.

Menendez said: “As the son of Cuban immigrants who fled an oppressive regime for a better life in the United States, I have dedicated much of my career in Congress, both in the House and the Senate, fighting for the dignity of immigrant families in New Jersey and all across America.

“Immigrants contribute greatly to our country and society; they own businesses, pay taxes and teach our children,” he said. “They are our co-workers, neighbours and friends. “We have an historic opportunity to finally enact bold immigration reform that leaves no one behind, addresses root causes of migration and safeguards our country’s national security. We have a moral and economic imperative to get this done once and for all.”

Clarke said the US Citizenship Act of 2021 establishes “a moral and economic imperative and a vision of immigration reform that is expansive and inclusive.”

The Act also eliminates discrimination facing LGBTQ+ families, provides protections for orphans, widows and children, and allows immigrants with approved family-sponsorship petitions to join family in the US on a temporary basis while they wait for green cards to become available, Clarke said.