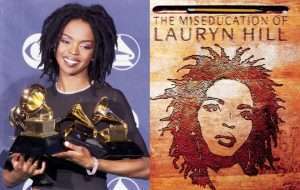 (COMPLEX) – More than 20 years after its release, The Miseducation of Lauryn Hill has reached diamond status.

The Recording Industry Association of America (RIAA) shared the news on Tuesday night, confirming Lauryn Hill’s debut album had sold more than 10,000,000 units since its 1998 release. It marks an increasingly rare milestone as on-demanding streaming has caused pure album sales to plummet. Hill has no joined an exclusive list of artists who have earned diamond-certified records, including Michael Jackson’s Thriller, Adele’s 21, Britney Spears’ …Baby One More Time, Eminem’s The Marshall Mathers LP, and 2Pac’s All Eyez On Me.

The Miseducation of Lauryn Hill was both a critical and commercial success, debuting at No. 1 on the Billboard 200 chart with more than 422,000 sales in its first week. It also earned Hill 10 Grammy nominations and five wins, including Album of the Year, Best R&B Album, and Best Female R&B Vocal Performance for “Doo Wop (That Thing).” The project spanned 16 tracks, two of which were hidden, and featured guest appearances by Mary J. Blige, D’Angelo, and Carlos Santana.

Though many believed the effort marked the beginning of a prolific solo career, Hill never released a follow-up album. The 45-year-old artist spoke about this decision in a recent interview on Rolling Stone’s 500 Greatest Albums podcast, explaining how the game had changed due to all her success.

“The wild thing is no one from my label has ever called me and asked how can we help you make another album, EVER…EVER. Did I say ever? Ever!” Hill said. “With The Miseducation, there was no precedent. I was, for the most part, free to explore, experiment, and express. After The Miseducation, there were scores of tentacled obstructionists, politics, repressing agendas, unrealistic expectations, and saboteurs EVERYWHERE. People had included me in their own narratives of their successes as it pertained to my album, and if this contradicted my experience, I was considered an enemy.”

She continued: “I think my intention was simply to make something that made my foremothers and forefathers in music and social and political struggle know that someone received what they’d sacrificed to give us, and to let my peers know that we could walk in that truth, proudly and confidently. At that time, I felt like it was a duty or responsibility to do so. … I challenged the norm and introduced a new standard. I believe The Miseducation did that and I believe I still do this—defy convention when the convention is questionable.”