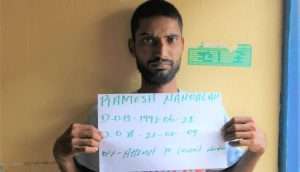 (NEWS ROOM GUYANA) – A 27-year-old woman of Cotton Tree, West Coast Berbice (WCB) died 14 days after her husband beat her, held a cutlass to her neck and forced her to drink a poisonous substance.

Prior to her death on Wednesday morning at the New Amsterdam Hospital, Sattie Jagmohan told the police about the abuse, which resulted in the arrest of her husband, 28-year-old Ramesh Nandalall, a fisherman.

On February 12, he was charged with attempted murder during his appearance at the Blairmont Magistrate’s Court and was remanded to prison by Magistrate Peter Hugh.

With the death of Jagmohan, police are now seeking the advice of the Director of Public Prosecutions (DPP) to institute a murder charge. A police report detailed that officers were informed on February 09 about Jagmohan’s condition at the Fort Wellington Hospital.

When ranks contacted her, she claimed that Nandalall always physically and verbally abused her and threatened to kill her many times. Jagmohan alleged that on February 03, at around 18:00h, Nandalall verbally abused her, during which he pushed her into a wall and kicked and cuffed her about the body.

She further alleged that he then placed a cutlass to her neck, gave her a white bottle containing a liquid substance and told her to drink it. Out of fear, Jagmohan said she drank the substance and was then taken to the Fort Wellington Hospital.

She was subsequently transferred to the New Amsterdam Hospital where she died at around 11:30h Wednesday.