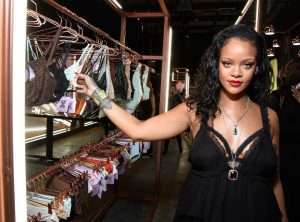 (URBAN ISLANDZ) – Rihanna now owns one of the most valuable companies in the world.

Rihanna might be missing in action on the music scene, but the businesswoman has been busy growing and promoting her business ventures. RiRi’s lingerie company Savage X Fenty which literally drove lingerie giants like Victoria Secret out of business, has reached $1 Billion in Lingerie Equity. Forbes is reporting that the company has hit another milestone as it reached the goal of raising $115 million Series B funding at a $1 Billion Valuation.

The Savage X Fenty brand was helped by L Catterton – whose main investor is LVMH – the luxury brand that produces the likes of Louis Vuitton, among other such names. The latest round of funding aims to help the Savage X Fenty brand in its retail expansion. The company originally launched as an online lingerie store but now has plans to go into athletic wear.

For the most part, Rihanna’s last musical project was released in 2016. Since then, we’ve seen her launch several companies in beauty and fashion, including her lingerie brand marketed as catering to women of all sizes and move away from the stereotypical niches that promoted super skinny and moderate sizes. Now, Rihanna’s inclusive brand has put skinny out of business as the actress and musician herself promotes the natural body in all shapes and sizes.

The brand now controls a sizeable chunk of the eye-popping $13.1 billion American underwear sector. The company itself has been performing well with revenue growth at a reported 200% posted for 2020 and “increased its active VIP member base by more than 150%, the company says.

“Following the completion of the fundraising round where L Catterton took a stake in Savage X Fenty, LVMH and Rihanna reaffirmed their ambition to concentrate on the growth and the long term development of Fenty ecosystem focusing on cosmetics, skincare and lingerie,” Rihanna and LVMH said in a joint statement.

Rihanna launching Savage X Fenty Athletic Wear Line.
According to Forbes, other athletic wear companies are on notice that Rihanna is about to take a chunk of their market. Her success with Fenty Skin that brought in 30% sales in the first four months after launch from a single e-store is just a hint at the artist’s star power and likeability among her millions of fans across the world.

Meanwhile, both Rihanna and LVMH said the Fenty House was put on hold to focus on the lingerie line as the fashion industry took a 93% loss due to the covid-19 pandemic as sales dropped mainly due to the lack of socializing around the world and people not having the need to go out.

For the fans anxious for new music from Rihanna, she assured them that music is still in the works, but for now she is working hard on her business ventures.