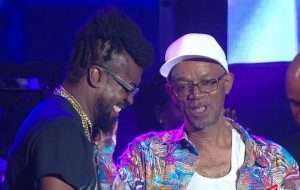 (URBAN ISLANDZ) – Leading Reggae artistes Freddie McGregor and Reggae Queen Marcia Griffiths along with Beres Hammond, and ‘King of the Dancehall’ Beenie Man along with Soca innovator Machel Montano are all set to be inducted into the Young, Gifted & Black (YGB) Caribbean Music Entertainment ICON Hall of Fame in New York as part of Black History Month commemorations on February 24.

Caribbean immigrants of African descent have played an integral role in promoting the development of culture, education, and development in the United States. At various junctions, they are appointed to posts at the top of their respective professions. The latest figure to make the community proud is the U.S Vice President Kamala Harris, who is of Jamaican and South Asian descent.

McGregor shared his gratitude for the recognition “was wondering when we would see something like this for our music, but with faith and patience here we are in my lifetime, so I know all things are possible. I am thankful for this very special honour.”

The President of YGB, Carl Gray, says the induction of these artists is important as it memorializes their contributions as historical members of society and their culture.

The YGB was founded in 2006 by Gray to recognize the talent and achievements of members of the –Caribbean –African American community. The past inductees include Tony Rebel, Richie Stephens, Bounty Killer, and Tanya Stephens.

McGregor has had a notably successful career since the launch of his first hit ‘Why You Do it”, in the Rocksteady era. Among his hits are ‘Big Ship,’ ‘Push Come to Shove,’ I was born a winner,’ ‘Let them try,’ ‘Stop Loving you,’ and ‘True to my roots.’