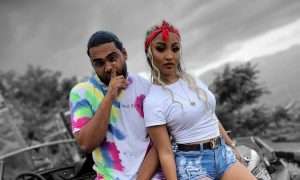 (URBAN ISLANDZ) – Shenseea’s manager Romeich is under fire for comments he made directed at a waitress in Altanta where while dining, the entertainment maestro threatened to kick the waitress because Shenseea and her crew were waiting too long.

Romeich Major rushed to do damage control on Sunday as he apologized and clarified that he is not an abuser and he has never abused any woman. He explained that he was hungry which resulted in his regrettable actions.

“for all the ladies that took what I said about waitress lastnight I apologize I aint no abusernor am I woman beater but a hungry man is a angry man and that waitress was very rude but I apologize for saying “if a ja me did deh woulda kick her” cause I aint putting no hands or feet on no one so am SORRY!!!”

The incident occurred on Saturday night as Shenseea, Romeich and other members of the Romeich Entertainment team were out in Atlanta dining when there was a verbal altercation with the waitress.

In the live video by Shenseea, Romeich can be heard asking “where’s the manager, send for the manager,” to a person not visible in the camera frame. Shenseea then says “she never put een mi order, you see what me say bout the waitress? People you know how long mi hungry? You mean say the woman really nuh put een mi order?”

Shenseea then says “aye no, she affi go get a little but of disrespect,” while Romeich concurs – “we mi ago wet har up,” he says.

That’s when Romeich said if he was in Jamaica he would kick the waitress. Fans took umbrage at the comments since Romeich himself is a business owner with many employees under his business.

While some criticized Romeich others said the waitress was rude and awful to the team.

The team has been in the U.S for three tour dates for Shenseea in Atlanta, Florida and New Jersey, New York and Connecticut. However, the latter three events were cancelled due to fears by State officials of a super spreader event.