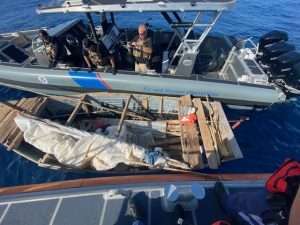 (CMC) — The United States Coast Guard said on Thursday that it has repatriated eight Cuban migrants to their native land after they were interdicted off the Florida Keys.

“A good Samaritan alerted Coast Guard Sector Key West watchstanders Monday to the people and rustic vessel,” the US Coast Guard said. “Due to concerns of safety of life at sea, watchstanders launched a Station Islamorada rescue crew, and Customs and Border Protection crew also arrived on scene.”

The US Coast Guard said rescue crews “safely embarked the seven men and one woman and transferred them to the Coast Guard Cutter William Trump crew”.

“The Coast Guard and our partner agencies will continue to rescue and repatriate undocumented migrants who take to the sea in unseaworthy vessels without safety equipment or a way to call for help,” said Lt Cmdr Mario Gil, Coast Guard liaison officer to Cuba.

“Voyages like these are never worth the risk,” he added. “The Florida Straits waters are unpredictable, and the risk for loss of life is great on vessels such as this.”

These numbers represent the total number of at-sea interdictions, landings and disruptions in the Florida Straits, the Caribbean and Atlantic Ocean, the US Coast Guard said.

“Once aboard a Coast Guard cutter, all migrants receive food, water, shelter and basic medical attention,” the US Coast Guard said.

“Throughout the interdiction, Coast Guard crewmembers were equipped with personal protective equipment to minimize potential exposure to any possible case of COVID-19,” it added.