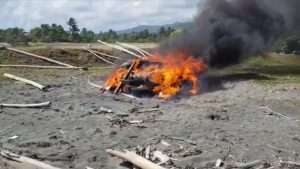 The action, consented by the magistrates of the respective jurisdictions, was announced by Superintendent Vannie Curwen, officer in charge of the RGPF’s community department.

Curwen indicated that 2,515 marijuana trees, 546 wrapped portions of cannabis, 405 lbs of cannabis & 2 ounces of crack cocaine were destroyed by the St. David’s police station, with a cumulative street value of EC $1,040,714.84.

The superintendent noted that the drugs were disposed of from the court from which they were seized from no one accused or a defendant over recent years.

He added that the RGPF saw fit to destroy the drugs to prevent a backlog and to mitigate possible corruption from the police force.