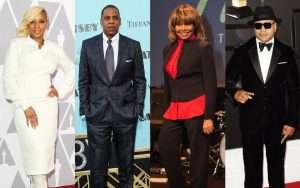 (URBAN ISLANDZ) – New York is getting strong representation from this year’s Rock and Roll Hall of Fame class of 2021 nominations list. Among those making the cut are New York natives Jay-Z, Mary J. Blige, LL Cool J, Carole King, and the New York Dolls. Dionne Warwick also makes the cut rounding out the nominee’s list with a regional flavor.

The induction will take place in Cleveland in the Fall, and among the other bands in the nominee’s list vying to be inducted are the Foo Fighters, Rage Against The Machine, Devo, The Go-Go’s, and Iron Maiden. Kate Bush, Chaka Khan, Todd Rundgren, and Tina Turner lead the list of solo artists, while for the first time – Nigerian Fela Kuti, who is credited for the rise of Afrobeat, is also included.

Voting polls are now open and fans are encouraged to vote for their favourite artist on rockhall. The top five artists who win the fans poll will get a “fans ballot” that will be counted along with the more than 1,000 judges’ votes to select a final winner.

The judges include the industry’s finest, including musicians, historians, and other representatives of the music industry. The main criteria for induction includes being in the industry and releasing the first recording 25 years ago.

Meanwhile, those appearing on the list for the first time include Foo Fighters, The Go-Go’s, Iron Maiden, Jay-Z, Carole King Fela Kuti, and Dionne Warwick. However, being inducted twice is possible and has occurred for Stevie Nicks- as the only female to have achieved the feat. She was inducted as a Solo Artist and also for her work with Fleetwood Mac.

If selected, Tina Turner and Carole King would join Nicks in the prestigious ranking. King was inducted as a songwriter in 1990, while Turner was inducted for her work with late husband Ike in 1991.