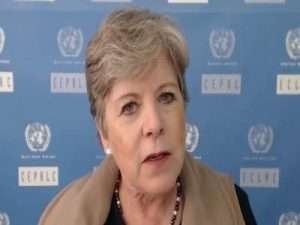 (CMC) — A new report by the Economic Commission for Latin America and the Caribbean (ECLAC) says the crisis caused by the COVID-19 pandemic has had a negative impact on employment and labour conditions for women in the region, generating a setback of more than a decade in terms of the progress achieved in labour market participation.

According to the Special Report, “COVID-19 No 9: The economic autonomy of women in a sustainable recovery with equality”, presented at a press conference by Alicia Bárcena, ECLAC’s executive secretary on Wednesday, — the rate of job market participation by women was at 46 per cent in 2020, while, for men, it was 69 per cent.

It further estimates that the unemployment rate for women reached 12 per cent in 2020, a percentage that rises to 22.2 per cent, “if we factor in women’s participation in the labour force in 2019”.

In 2020, the study says there was a mass exodus of women from the labour force, “who have not returned to search for employment, having to attend to care demands at home”.

The report added that the decline in regional gross domestic product (GDP) (-7.7 per cent in 2020) and the impact of the crisis on employment are negatively affecting household income.

“The women of the region are a crucial part of the frontline response to the pandemic,” Bárcena said. “Some 73.2 per cent of people employed in the health sector are women, who have had to face extreme working conditions, such as long work days, in addition to increased risk of contagion as health personnel.

“All of this in a regional context in which salary discrimination persists, where salaries for women who work in the health sector are 23.7 per cent less than men’s in the same sector,” she added.

The study further underscores that paid domestic work, characterised as “highly precarious and impossible to do remotely,” has been one of the sectors hit hardest by the crisis.

In 2019, before the pandemic, the report says around 13 million people worked in paid domestic labour (91.5 per cent of them women).

In total, the study says this sector employed 11.1 per cent of employed women in the region.

“Latin America and the Caribbean must invest in the care economy and recognise it as a dynamising sector in the recovery, with multiplying effects on wellbeing, the redistribution of time and income, labour participation, growth and tax revenue,” said Bárcena, urging governments to “prioritise health workers in their vaccination strategies — including persons who provide associated services like cleaning, transport and care — as well as those working in educations systems and domestic health, most of them women, who are a fundamental pillar for the care and sustainability of life.”

According to the ECLAC report, 56.9 per cent of women in Latin America and 54.3 per cent in the Caribbean are employed in sectors where the pandemic is expected to have a higher negative impact in terms of employment and income.

The study says the closing of borders, restrictions on mobility, the fall in international trade and paralysis of internal production have impacted the female workers and businesswomen associated with sectors like commerce, tourism and manufacturing.

For instance, the tourism sector, where 61.5 per cent of positions are occupied by women, suffered a significant contraction that mainly affected the countries of the Caribbean, where one in 10 working women are employed in this sector, the report says.

During the presentation of the report, ECLAC’s Executive Secretary highlighted the urgent need to reinforce employment policies and ensure that women participate in the dynamising sectors of the economy in decent working conditions.

She, likewise, emphasised the importance of combining measures aimed at employment support and reactivation with measures of immediate attention to losses in income.

In this context it is “urgent that we promote inclusive processes of digital transformation that guarantee women access to technologies, strengthen their abilities and remove the socioeconomic barriers they face in order to strengthen their economic autonomy,” underlined Bárcena, while, at the same time, stressing the low fiscal effort posed by the basic digital basket proposed by ECLAC (one per cent of regional GDP) and the “enormous impact” connecting one of every four women in Latin America and the Caribbean would have.

“It is essential that we advance toward a new fiscal compact that promotes gender equality and prevents the deepening of poverty levels among women, the burden of non-paid work and the reduction of financing for gender policies,” she warned.

“In addition to having a gender perspective that cuts across all recovery policies, affirmative actions are required in the areas of fiscal, labour, productive, economic and social policies to protect the rights of women achieved in the past decade, prevent setbacks and take on gender inequalities in the short, medium and long terms,” Bárcena added.