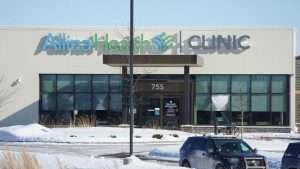 (AP) — A 67-year-old man unhappy with the health care he’d received opened fire at a clinic Tuesday and injured five people, and bomb technicians were investigating a suspicious device left there and others at a motel where he was staying, authorities said.

All five victims were rushed to the hospital. Three remained in stable but critical condition on Tuesday evening, and a fourth had been discharged. The condition of the fifth victim was not immediately known.

The attack happened Tuesday morning at an Allina clinic in Buffalo, a community of about 15,000 people roughly 40 miles (64 kilometres) northwest of Minneapolis. Authorities said Gregory Paul Ulrich, of Buffalo, opened fire at the facility and was arrested before noon.

Though police said it was too early to tell if Ulrich had targeted a specific doctor, court records show he at one point had been ordered to have no contact with a man whose name matches that of a doctor at the clinic.

As authorities searched the clinic for more victims, they found the suspicious device and evacuated the building, Wright County Sheriff Sean Deringer said.

It was not immediately clear whether that device exploded, but TV footage showed several shattered plate-glass windows at the clinic. Deringer said suspicious devices were also found at a local Super 8 motel where Ulrich had been staying, and there were at least two shattered windows there as well.

Police Chief Pat Budke became emotional and had to pause during a news conference as he told reporters “our heart breaks as a community.” While an exact motive wasn’t immediately known, Budke said Ulrich has had a long history of conflict with health care clinics in the area.

“All I can say is, it’s a history that spans several years and there’s certainly a history of him being unhappy with health care … with the health care that he’d received,” Budke said.

Budke said Ulrich’s history led investigators to believe he was targeting the clinic or someone inside but that it was too early in the investigation to know if it was a specific doctor. He said the shooting did not appear to be a case of domestic terrorism.

“None of the information that we have from our past contact with him would indicate that he was unhappy with, or would direct his anger at, anyone other than people within the facilities where he had been treated or where they had attempted to give treatment,” Budke said.

Deringer said Ulrich was well known to law enforcement before the attack, and there were calls for service dating back to 2003.

Court records for Ulrich list a handful of arrests and convictions for drunken driving and possession of small amounts of marijuana from 2004 through 2015, mostly in Wright County, including two convictions for gross misdemeanour drunken driving that resulted in short jail sentences. A 2018 charge of violating a harassment restraining order was dismissed last April when the prosecutor said Ulrich was “found mentally incompetent to proceed.”

Conditional release orders in the harassment case from November 2018 and September 2019 showed Ulrich was ordered to have no contact with an Andrew John Burgdorf. He wasn’t identified further in the filings, but the clinic’s staff list includes a Dr Andrew J Burgdorf, who practices in family medicine and geriatric care.

It was not known Burgdorf was among Ulrich’s victims. A phone call placed to a home listing for Burgdorf went unanswered Tuesday.

Ulrich also had raised concerns for a local church. According to an August 2019 update on the website of Zion Lutheran Church, the church obtained a no trespassing order for Ulrich after the pastor received a disturbing letter. Church staff were given a picture of Ulrich and told to call 911 if he appeared on any of Zion’s properties.

A court services agent who conducted a pre-sentence investigation wrote in a June 2019 filing that he had just learned that Ulrich had applied to police for a “permit to purchase” — apparently meaning a permit to buy a gun — but had not yet been approved. The agent said he “highly recommended” that Ulrich “not be allowed to have use of or possession of any dangerous weapons or firearms as a condition of his probation.”

The FBI sent its bomb technicians to the scene, and the Minneapolis Police Department sent its bomb squad. Members of the Bureau of Alcohol, Tobacco and Firearms’ enforcement group and special agents from the state’s Bureau of Criminal Apprehension also responded.

The clinic is set off at the edge of Buffalo near an old red barn with flaking paint. Dozens of emergency vehicles and law enforcement officers carrying guns were on the scene, setting up a perimeter. TV footage showed little activity at the clinic itself.

Hours after the attack, law enforcement cordoned off a small mobile home park near the city’s Pulaski Lake, about a mile from the clinic, and searched a mobile home where Ulrich had lived. Officers went in and out of the home wearing rubber gloves. Several neighbours who declined to give their names described Ulrich as argumentative and said they tried to avoid him.

Tom Potter, a 43-year-old who lives in the neighbourhood, said Ulrich was nice to Potter’s kids yet described him as “an odd guy.”

“He’d get into fights with neighbours, accuse them of stealing stuff,” Potter said.

He said Ulrich spent a lot of time on a bench by the lake, listening to a radio, fishing and “always drinking.”

Another neighbour, Walter Rohde, told the Minneapolis Star Tribune that he was shocked to hear Ulrich was suspected of shooting people. He said Ulrich helped him build a shed over the summer and would often come over to sit at his fire ring in the evenings to chat.

“I just knew him as a kindly old man,” Rohde said.

Most doctors listed on the clinic’s website are family practitioners. It wasn’t immediately clear if the clinic gives COVID-19 vaccinations. Allina’s website says it gives the shots to staff and older patients at only three sites throughout its extensive system.