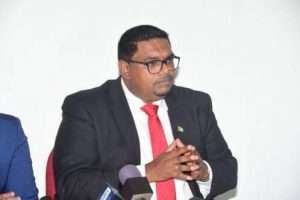 (CMC) — President Irfaan Ali has expressed gratitude to Guyana’s regional and international partners for joining in calls for the release of the 12 Guyanese fishermen who were detained in Venezuela for two weeks.

The fishermen along with their vessels, Lady Nayera and Sea Wolf, were intercepted by a Venezuelan navy ship, off the coast at Waini Point within Guyana’s Exclusive Economic Zone (EEZ), on January 21.

Following the detention, Guyana received support from several countries including Belize, Brazil, Canada, France, Trinidad and Tobago, the United Kingdom and the United States of America. Groups from the regional and international community, such as the Caribbean Community ( CARICOM), the Organization of American States, the Commonwealth, Organization of African, Caribbean and Asia-Pacific States and the European Union, also conveyed their support for Guyana.

President Ali said he was sure those statements made an impact and contributed to Venezuela releasing the crew and boats late Tuesday.

With the release of the Guyanese, the President said his Government is now willing to hold discussions with Venezuela on issues unrelated to the border matter that is currently before the International Court of Justice (ICJ).

“We have other issues like COVID-19 and, as good neighbours, we are willing to discuss those issues. Venezuela’s Foreign Minister did talk to our Foreign Minister and we reiterated that once there is a need to speak on any issue, the ICJ issue is…not up for discussion. We have already made our position clear on that,” he said.

The President also referred to his January 30 address to the nation where he called on Venezuela to act responsibly and not “continue along this line, interfering with anyone conducting business in our waters”.

“We have made it clear that this is our right. Our EEZ is our right and we will continue to facilitate the economic activity in our region,” he said.

Venezuela had claimed that the 12 Guyanese were fishing illegally in its territorial waters. They appeared in court on January 25 and were told they would be held for 45 days pending an investigation.

However, following the intervention of Venezuela’s President Nicolas Maduro, the case against the fishermen was discontinued.

The detention of the fishermen occurred even as Guyana awaits the start of the substantive hearing of the border case.

Guyana is looking to the ICJ to uphold the validity of the 1899 Arbitral Award which settled the land boundary between the two countries.

A case management hearing, which has twice been delayed at Venezuela’s request, has been set for February 26.