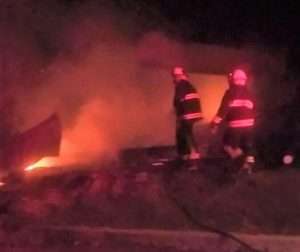 (TRINIDAD EXPRESS) – THE HOUSE connected to a man who allegedly took 14-year-old Michael Sooknanan to the Pointe a Pierre refinery where he was electrocuted, was destroyed by fire last night.

Around 9 p.m. villagers of Cotton Hill, Mayo were alerted to the fire and saw flames coming from the man’s wooden home.

Attempts were made to douse the blaze with sand and the little water afforded to the people of the area. Villagers also tried to prevent the fire from spreading to a nearby house occupied by an elderly woman and her grandchildren.

Fire officers arrived on the scene and contained the blaze.

Police officers who were also on the scene, remained after the fire was extinguished.

The man, in his late twenties, was not present as his home burnt. The Express was told he was at the home of a relative nearby.

Sooknanan’s body was found on an electricity pole on Petrotrin’s compound on Wednesday morning.

His sister told reporters that he left home on Tuesday evening with a welder with whom he worked. The teen told them he would return later that night or the next morning but when he failed to arrive home, a missing person report was made to the police.

The welder when contacted by a relative of Sooknanan’s, allegedly said he had dropped the teen off near his home.

Michael’s body was found around 9 a.m. on Wednesday on top of the electricity pole. One of his hands was severed.

Police believe he was at the refinery with others to steal copper when he came into contact with high tension wires and the person(s) he was with fled the scene.

However, the Sooknanan’s relatives said he would not have been involved in anything illegal.

Sooknanan who would have celebrated his 15th birthday next month, left school at the primary level and did construction work and also worked in the garden with his father.

In a press release, Petrotrin expressed condolences to the 14-year-old boy’s family.

The release, on a Petrotrin letterhead, said, “Preliminary investigations indicate that the individual entered the compound without any authority, scaled the electricity pole, and in so doing, encountered the live high-tension power line and tragically lost his life.”

The company reminded the public of the life-threatening danger involved in unauthorized interference with its assets including, in particular, mechanical and electrical assets.

“The public is also urged to adhere to all public notices and signage on restricted areas for their own safety,” the release added.

Officers from the Marabella and Gasparillo police stations and officials from the Trinidad and Tobago Electricity Commission (T&Tec) were at the scene following the discovery of Sooknanan’s body by officers of Amalgamated Security Services who were on mobile patrol.