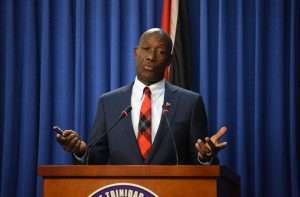 (TRINIDAD EXPRESS) – Even with the rollout of the Oxford-AstraZeneca Covid-­19 vaccine by March, Government’s position that there will be no Carnival 2021 remains, Prime Minister Dr Keith Rowley said on Wednesday.

Speaking at a news conference at the Diplomatic Centre, St Ann’s, he said no­th­ing had happened to cause Government to change its decision.

“I know that there are individual appreciations and individual receipts of it, but let’s face it…there’s a problem rooted and fertilised by congregation and closeness of people, that’s an oil and water situation; Carnival and Covid don’t mix,” Rowley stressed.

“As far as I am aware, a Carnival is the coming together of people in the clo­sest of ways, with the greatest of interaction. I don’t know of another kind of Carnival. I see all kinds of suggestions being made about things to do.

“They might be good things to do, but the Carnival as we know it, which involves the coming together, our Carnival is about one-third of the population coming together over a season, not even a day,” he pointed out.

Rowley acknowledged the cancellation of Carnival would have serious economic consequences and individual hardships, however, he stressed the alternative to that was something T&T had to avoid.

“Let us not forget that as we miss Carnival, what we don’t want to be a participant in is a Carnival of coffins. And the Government’s position is that we are going to have to miss Carnival in 2021,” he said.

Rowley said he hoped Carnival 2022 was in the planning stages.

“Hopefully, by then, things should have changed sufficiently…either that the viral infection levels would have dropped, the vaccination levels would have risen, the responses are positive and we are in a state where congregation is not a problem. As long as the coming together of people in close contact is a problem, we will have a problem with Carnival,” he said.

Asked about his views on virtual Carnival events being held, Rowley said as long as they were not breaking the law, “people are free to do what they think they want to do…but just remember that it is not the Carnival that we have been accustomed to.

“Well, I must say that I don’t know that Trinidadians and Tobagonians could have a single-file Carnival. Lots of suggestions were made and some of it might come to pass and be quite useful while not breaching the protocols.

“But we certainly will want to insist that we observe the protocols and observe the law.”