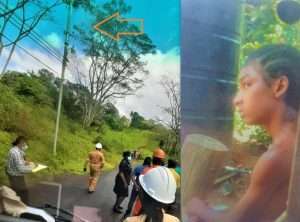 (TRINIDAD EXPRESS) – A 14-YEAR-OLD was electrocuted at the Pointe a Pierre refinery this morning.

The family of Michael Sooknanan of Cotton Hill Road, Mayo has left in mourning.

Sooknanan’s sister Tiffany Sooknanan, said he left home on Tuesday evening with a person from the area. He told his family he would return later that night or early in the morning.

The family became worried when he did not come home and made a report to the police around 9 p.m. Sooknanan’s father also made contact with the person who had picked up his son. The man told him that he had dropped off the teen near their home.

However the 14-year -old had been electrocuted.

His body was found on an electricity pole around 9 a.m.

Police believe he was there with others to steal copper when he came into contact with high tension wires and the person(s) he was with left the scene.

Tiffany Sooknanan however said her brother would not have been involved in anything illegal and may have been taken to that location by a welder whom he had been avoiding.

She said her brother who left school at the primary level worked in the garden and did construction with his father.

“He was very helpful,” she said.

Officers from the Marabella and Gasparillo police stations, Petrotrin police and officials from the Trinidad and Tobago Electricity Commission (T&Tec) were at the scene this morning.