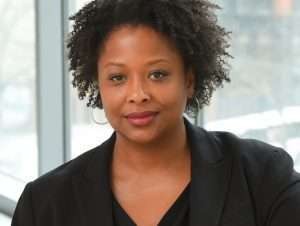 (CMC)— The American Civil Liberties Union (ACLU) has announced that its national board has elected Jamaican American lawyer and law professor Deborah Archer as its new president.

The ACLU – a non-profit organization founded in 1920 “to defend and preserve the individual rights and liberties guaranteed to every person in this country by the Constitution and laws of the United States” – said that Archer replaces Susan Herman, who stepped down after serving 12 years leading the organization’s board “through watershed moments, including the Trump administration and the emergence of civil liberties and privacy concerns in the digital age.”

The ACLU said it works through litigation and lobbying, providing legal assistance in cases when it considers civil liberties to be at risk.

An established civil rights lawyer, scholar and teacher, the ACLU said Archer began her career as the Marvin M Karpatkin Legal Fellow at the ACLU.

Archer also serves on the board of directors of the New York Civil Liberties Union.

“In this new role, she brings with her a wealth of experience on racial justice and constitutional matters,” said the ACLU in a statement. “The election of Deborah Archer marks the first time a Black person will lead the ACLU’s board of directors.”

“After beginning my career as an ACLU fellow, it is an honour to come full circle and now lead the organization as board president,” Archer said. “The ACLU has proven itself as an invaluable voice in the fight for civil rights in the last four years of the Trump era, and we are better positioned than ever to face the work ahead.

“This organization has been part of every important battle for civil liberties during our first century, and we are committed to continuing that legacy as we enter our second. I could not be more excited to get to work,” she added.

The ACLU said its board met virtually on Saturday to cast the vote for its next president.

The ACLU National Board is made up of 69 members, including 51 directly elected by ACLU affiliate boards as their representatives, and 18 elected by all affiliate and national board members.

The ACLU National Board votes to set matters of organizational policy and substantive civil liberties policies.

It also oversees issues related to general financial management and the relationship between the national ACLU and its affiliates, including the provision of resources and support to the affiliates, as well as other responsibilities.

“As the country enters the post-Trump era, it is essential that those in leadership intimately understand the history that brought us to this inflection point, and the work ahead,” said Anthony D. Romero, executive director of the ACLU. “There is no one better equipped, who best personifies or is more capable to helm the future battles for civil rights, civil liberties, and systemic equality than Deborah Archer.”

For both the country as a whole and the ACLU, “2020 was a watershed year,” said the ACLU, adding that the country struggled with its history of white supremacy and racism, a protest movement that rivalled only by the Civil Rights Era of the 1960s, the COVID-19 pandemic, and one of the highest turnout elections in history.

The ACLU celebrated its centennial year, filed its 413th legal action against the Trump administration, took over 100 legal actions in response to the pandemic, continued its work to protect protestors, and filed more than 37 lawsuits to ensure access to the polls.

Archer is a tenured professor of clinical law and director of the Civil Rights Clinic at New York University School of Law, and co-faculty director of the Centre on Race, Inequality and the Law at NYU Law.

Professor Archer previously served as the inaugural dean of diversity and inclusion and as associate dean for academic affairs and student engagement at New York Law School.

She has served as chair of the New York City Civilian Complaint Review Board, and on numerous nonprofit boards, including the Legal Aid Society and the National Centre for Law and Economic Justice.

In recognition of her work, the New York Law Journal named her one of its 2016 Top Women in Law.

Previously, Archer was assistant counsel at the NAACP Legal Defense and Educational Fund and an associate at Simpson Thacher & Bartlett.

The NAACP (National Association for the Advancement of Coloured People) is the largest and oldest civil rights organization in the United States.

“I would like to extend a sincere congratulations to Deborah Archer, the new president of the ACLU,” Caribbean American Congresswoman Yvette D Clarke, told the Caribbean Media Corporation (CMC) on Tuesday. “After 101 years, it is high time that a person of colour holds this position.

“More aptly, I am proud that the first Black president of the ACLU is of Jamaica-American heritage,” added Clarke, the daughter of Jamaican immigrants, who represents the largely Caribbean 9th Congressional District in Brooklyn, New York. “The ACLU has been part of every important battle for civil liberties during our first century, and they remain committed to continuing that legacy as we enter our second.

“I wish President Archer all the best on her mission to advance future battles for civil rights, civil liberties and systemic equality,” she added.