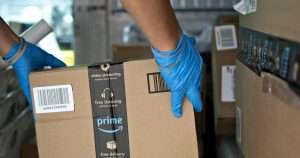 (CBS NEWS) – Amazon needs to pay back nearly $62 million in drivers’ tips that it skimmed over the years, federal regulators said Tuesday. The Federal Trade Commission unveiled a complaint against the ecommerce giant on Tuesday alleging that Amazon’s Flex program stole nearly $62 million in tips from its army of drivers between 2016 and 2019.

“Rather than passing along 100 percent of customers’ tips to drivers, as it had promised to do, Amazon used the money itself,” Daniel Kaufman, acting director of the FTC’s Bureau of Consumer Protection, said in a statement.

News of the settlement comes as Amazon founder Jeff Bezos said he was stepping down as CEO, capping off a year of meteoric growth for the ecommerce company.

Launched in 2015, Amazon Flex allowed ordinary people to sign up for shifts using their personal car to deliver Amazon packages. Amazon advertised that drivers could make $18 to $25 an hour in the program and earn tips for certain deliveries, according to the FTC complaint. The company told drivers that it would “pass to you 100% of tips you earn”; it also told customers that “100% of your tips are passed on to your courier,” according to the FTC complaint.

Soon after Amazon Flex launched, however, the company started skimming drivers’ tips, the FTC claims. In late 2016, the company secretly switched to a variable-pay system, where the amount drivers earned would fluctuate based on an internal algorithm, regulators allege. Under this system, the complaint alleges, Amazon could advertise a payment of “$18-$24” for a particular delivery, but if a customer tipped $6, Amazon would only pay the driver $12, for an $18 total payment.

At that point, “Amazon decided to obscure from drivers that it was reducing their pay, and began reporting their earnings as a single lump sum that hid any distinction between customer tips and pay from Amazon,” the complaint alleges. “Based on the information Amazon provided, drivers could not tell whethr Amazon had contributed its minimum for the delivery block or a lesser amount, nor could drivers tell the amount of any customer tip.”

Amazon also discouraged customers from tipping in cash, with the app saying that “cash is not accepted upon delivery.”

Hundreds of drivers saw their pay decrease and complained to Amazon, the FTC said, but the company responded to them with canned emails saying that “delivery partners still earn $18-25 per hour including 100% of customer tips,” the complaint says. At the same time, Amazon employees circulated these complaints internally and acknowledged that the issue was “a huge PR risk for Amazon,” the complaint alleges.

Only when the FTC told Amazon it was being investigated did the company change its pay practices, announcing to drivers in August 2019 that it was implementing an “Updated Earnings Experience,” which was in fact the payment scheme Flex used upon its initial launch.

Amazon did not admit wrongdoing as part of the settlement. The company will be required to pay $61.7 million to the FTC, which the agency will distribute to drivers. The agreement also formally bars the company from lying about tips in the future and requires it to get drivers’ consent before changing payment models.

“While we disagree that the historical way we reported pay to drivers was unclear, we added additional clarity in 2019 and are pleased to put this matter behind us,” an Amazon spokesperson told CBS News in a statement. “Amazon Flex delivery partners play an important role in serving customers every day, which is why they earn among the best in the industry at over $25 per hour on average.”

“[T]his cannot be the only action we take to protect workers and families from dominant middlemen. The FTC will also need to carefully examine whether tech platforms are engaging in anticompetitive conduct that hoodwinks workers and crushes law-abiding competitors,” Chopra said in a statement. “While Amazon.com is one of the largest, most powerful, and most feared firms in the world, the company cannot be above the law.”