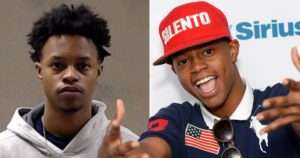 (COMPLEX) – The 23-year-old rapper Silento, who is best known for his debut 2015 single “Watch Me (Whip/Nae Nae),” was arrested on one count of murder on Monday, TMZ reports.

Silento, real name Ricky Lamar Hawk, was arrested and booked into DeKalb County Jail after he was accused of fatally shooting his 34-year-old cousin Frederick Rooks last month, according to The Atlanta Journal-Constitution. Police discovered Rooks deceased in the early morning hours of Jan. 21 with several gunshot wounds to the chest. 8 bullet casings were recovered from the scene.

The rapper was previously arrested and hit with two felony counts of assault with a deadly weapon last summer after he entered a home with a hatchet while searching for his girlfriend.