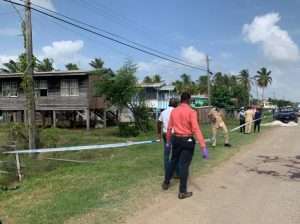 (GUYANA NEWSROOM) – In a bizzare incident, a Berbice man went into a fit of rage Sunday night and rushed into a crowd with a knife, stabbed two persons to death and then proceeded to go sit in his house and eat and watch television.

Dead are Mahendra Ramotar known as Sunny, 43, and Surendra Raghunandan known as Ranga, both of No. 43 Public Road Corentyne, Berbice.

The two persons were among a group of persons who were attending a wedding but appeared not to have been the original target.

Reports are that the suspect, Vernand Ravi Ragadoo, was drinking vodka at a neighbour’s house when, about round 21: 30h, he became upset when he noticed the neighbour Randolph Richmond and his wife Sukamattie Richmond quarreling on the roadside.

As a result, he grabbed a knife and rushed into the crowd, stabbing four persons.

Meanwhile, the neighbour’s wife Sukamattie and Anthony Persaud, who was in the crowd, also suffered injuries. They are both admitted at the New Amsterdam Hospital and their condition is regarded as serious.

When Police went to arrest Ragadoo, they found him watching television and eating. He did not put up a resistance and was taken into custody.