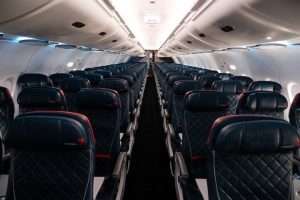 (FOX BUSINESS) – A slew of minor in-flight errors occurred over the past year in part because pilots are feeling “rusty,” according to a new report.

Low travel demand due to the outbreak of the coronavirus has kept many pilots out of the cockpit for a prolonged period, especially at the height of the pandemic when passenger traffic fell to a level not seen in more than six decades.

In one instance, it took a pilot three tries to get a passenger jet touch down successfully on a windy day, the Los Angeles Times reported. Another pilot reported damaging part of a towing vehicle after pulling the jet away from an airport gate before disengaging the parking brake.

Meanwhile, a first officer disclosed that they forget to activate the plane’s anti-icing mechanism, ensuring the altitude and airspeed sensors on the plane’s exterior are not obstructed by ice, according to the report.

Although the plane safely completed its flight, the first officer admitted that they were “rusty” after not flying “in a few months.”

“I felt that my recollection was strong enough, but in reality I should have taken some time to review” the procedures, the first officer said in an anonymous report, the Times reported.

The virus had devastated the industry to such an extent that most of the major carriers had to furlough employees, including some pilots, in order to weather the storm.

As recently as three days ago, Southwest Airlines said it will be offering employees another round of voluntary leave even after rolling back on plans on any furloughs or pay cuts for thousands of workers in 2021.

Just a few months earlier, American and United airlines had furloughed about 32,000 employees.

The break doesn’t provide any “elevated risk to the flying public,” experts say.

“It is such a regulated industry and there is so much redundancy in every aspect of it,” Aircraft Owners and Pilots Association Senior Vice President Richard McSpadden Jr. told FOX Business.

What you are hearing about in these instances are pilots who say aren’t as sharp as they used to be and are just not used to making these tiny errors, he said.

It takes both recency, frequency and redundancy to hone in on any skill, including flying, he added. When you’re out of practice, it just takes longer to get back into the routine of it.

However, because pilots are “very disciplined and very well trained” they “typically understand that they have to slow down” and take their time, he said.

What also helps is that “there are redundancies, not only in the system, but in the procedures” themselves. On top of that, there are two people in the cockpit that are backing each other up, McSpadden Jr. said.

Additionally, Airlines for America, the industry trade organization representing the leading U.S. airlines, told FOX Business that “commercial air travel is the safest form of transportation in the world.”

“A4A member carriers have stringent policies to ensure and maintain pilot proficiency during this period of reduced operational demand,” an Airlines for America spokesperson said.