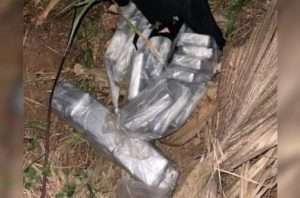 (CMC) — The United States Coast Guard says its aircrew combined efforts with US Border Patrol agents during a drug-smuggling operation in the Caribbean Sea that resulted in the seizure of 157 pounds of cocaine and the arrest of two suspected smugglers from the Dominican Republic near Villa Montana, Isabela, Puerto Rico.

The US Coast Guard said the estimated wholesale value of the seized cocaine is US$1.9 million.

“The joint collaboration is the result of ongoing Caribbean Border Interagency Group (CBIG) multiagency efforts in their common goal of securing the borders of Puerto Rico against illegal threats,” US Coast Guard said on Wednesday.

While on a routine patrol, the US Coast Guard said the crew of a Coast Guard aircraft detected a suspect 21-foot go-fast vessel, about four nautical miles northwest of Aguadilla, Puerto Rico.

While maintaining aerial surveillance of the vessel, the US Coast Guard aircrew “vectored-in” the border patrol units to the location where the suspected smugglers made landfall.

Shortly thereafter, the border patrol agents, which included a K-9 unit, apprehended the two men and seized 58 packages of cocaine, the US Coast Guard said.

It said US Immigration and Customs Enforcement — Homeland Security Investigations (ICE-HSI) assumed custody the contraband and the suspected smugglers for investigation and prosecution.

“We continue to disrupt and apprehend smugglers that attempt to smuggle people and narcotics across our borders,” said Xavier Morales, chief patrol agent for the US Coast Guard’s Ramey Sector.