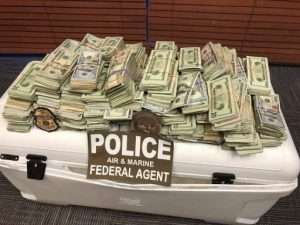 (CMC) — The United States Customs and Border Protection (CBP) agency said Tuesday that agents from its Air and Marine Operations (AMO) and US federal partners seized about US$500,000 in undeclared currency after stopping a vessel, heading to the Bahamas, for an outbound inspection near Fort Lauderdale, Florida.

A K-9 alerted to the centre console during a search of the vessel, CBP said, where agents discovered the currency in the lining of a cooler and laundry detergent boxes.

CBP said Air and Marine Operations “safeguards our nation by anticipating and confronting security threats through our aviation and maritime law enforcement expertise, innovative capabilities, and partnerships at the border and beyond”.

“With approximately 1,800 federal agents and mission support personnel, 240 aircraft, and 300 marine vessels operating throughout the United States, Puerto Rico, and US Virgin Islands, AMO conducts its mission in the air and maritime environments at and beyond the border, and within the nation’s interior,” it added.