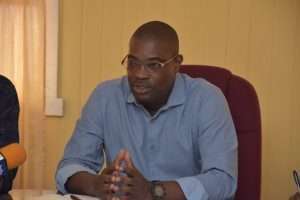 Patterson, who is also General Secretary of the Alliance For Change (AFC), and Adams jointly face the indictable charge that, between November 18, 2016, and February 1, 2018, they conspired with each other and with other persons unknown to defraud the Demerara Harbour Bridge Corporation (DHBC) Asphalt Plant of G$162,635,015 (US$780,091), for a project about a feasibility study and design for a new bridge, which was not a function of the DHBC and so monies from the Asphalt Plant account could not be used.

The two were each released on G$200,000 (US$959) bail when they appeared before Senior Magistrate Leron Daly who adjourned the matter to February 15, 2021.

Attorney-at-law Nigel Hughes, who is on Patterson’s defence team, told reporters outside the Georgetown Magistrates’ Court that the charge against his client “not only is unfounded but malevolent”.

“These charges seem clearly to be in the political realm rather than the legal,” he said.

The charge, which was filed after investigations by the Guyana Police Force’s Special Organised Crime Unit (SOCU), stemmed from the controversial award of a contract for the feasibility study and design of a new Demerara River Crossing in 2016.

Several companies had put in bids for the feasibility study and design and 12 had been shortlisted, but only two actually made proposals and the bidding process was annulled. But in November 2016, the National Procurement and Tender Administration Board (NPTAB) approved the move for the project to be re-tendered.

However, the project was not re-tendered. Patterson, as Minister of Public Infrastructure, had made a request to Cabinet for approval to use funds from the Asphalt Plant account and award the contract to LievenseCSO Engineering Contracting BV, a company from the Netherlands.

The request was not forwarded through the NPTAB as it should have been but submitted directly by Patterson. Cabinet approved the money for the project.

However, the Public Procurement Commission (PPC) had conducted an investigation into the matter, and concluded that the procurement procedure used to award the contract was in contravention of the Procurement Act.

Adams had signed the contract with Lievense CSO.

Patterson had been cleared by SOCU of any wrongdoing, following an investigation that was triggered by a complaint filed by the then opposition People’s Progressive Party/Civic (PPP/C). SOCU said then it had received legal advice that there was no misuse of funds, neither was there evidence of any criminal offence.