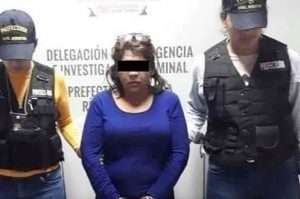 (NEW YORK POST) – A Mexican woman flew into a rage and stabbed her husband when she found what she thought were snaps of him on his phone having sex with another woman – who happened to be her when they were dating years ago.

Police responded last week to reports of a domestic dispute at the couple’s home in Cajeme, Sonora, where they discovered the man with multiple stab wounds on his arms and legs, the Daily Mail reported.

His wife, identified as Leonora A, reportedly went ballistic when she found the explicit photos on his phone showing him have sex with whom she thought was another woman.

Without asking him about the photos, Leonora allegedly began attacking her shocked hubby, identified as Juan N., who finally managed to wrestle the knife from her hands and asked her what set her off, the outlet reported.

Juan then told Leonora that the woman she thought he had been cheating with was actually her – when they were just dating.

His wife apparently did not recognize herself because she was younger, thinner and had makeup on, according to the report.

Juan, who is expected to recover from the injures, told investigators that he told his jealous wife that he had recently found the photos in an old email and transferred them to his phone.

Leonora was arrested and remains behind bars pending charges, the Daily Mail reported.