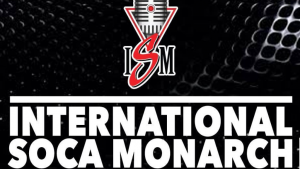 (TRINIDAD EXPRESS) – The final of the International Soca Monarch (ISM) competition will take place on February 12, what would have been Carnival Friday, at the National Academy for the Performing Arts (NAPA).

This year’s run of the competition will have neither a preliminary round, nor a semi-final. There will just be the final featuring ten artistes, to be selected by a panel of judges who will listen to songs submitted by artistes wishing to participate when they register for the competition.

The 2021 ISM will thus this year not feature two categories, Power and Groovy, but just the one competition in which both styles of soca will be performed. Last year’s winners, Iwer George and Kees Dieffenthaller (Power), and Jesse “College Boy Jesse” Stewart (Groovy) will not automatically defend their respective titles, but will have to register and submit songs in the hope of being selected for the final like everyone else.

“Being mindful of the times we are in right now, with the pandemic, we have to do things in a different way this year. We decided to have the competition still because we have a responsibility to still represent our brand and our culture in this time and in light of what Covid has done. We have also considered what the artistes and producers have been going through the past months. People need to be allowed to celebrate our culture still and that goes for everything.

“The competition will not have the two categories because we have to consider the limited resources at present and also the limited two-hour space we have to work within. Anyone can enter, the seasoned artistes and the emerging. We have been receiving a lot of submissions thus far,” Baptiste said.

The final will see the artistes performing accompanied by a live band and there will be a limited live audience in accordance with what the Covid-19 protocols permit on the night. The final of the ISM has traditionally been broadcast live and this will be the case this year as well. The show will be televised and streamed online so people the world over will be able to see it.

“I know virtual is a very popular word these days, but the Soca Monarch has been televised for as long as it’s been here and it has been streamed for years. Everything that will ensure the safety of the artistes, musicians, crew and audience will be in place and in strict accordance to what protocols the authorities lay down,” Baptiste said.