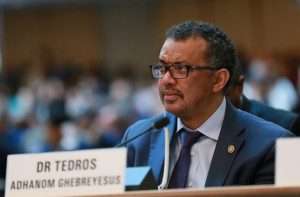 (AFP) — The COVID-19 vaccine divide between rich and poor nations is worsening by the day, the World Health Organization warned Monday, insisting the failure to distribute doses fairly could cost the global economy trillions of dollars.

The WHO said it needed US$26 billion this year for its programme aimed at speeding up the development, procurement and equitable delivery of vaccines, treatments and tests to beat the coronavirus pandemic.

“Rich countries are rolling out vaccines, while the world’s least-developed countries watch and wait,” lamented WHO director-general Tedros Adhanom Ghebreyesus.

“Every day that passes, the divide grows larger between the world’s haves and have nots,” he told a press conference.

“Vaccine nationalism might serve short-term political goals. But it’s in every nation’s own medium and long-term economic interest to support vaccine equity.”

Tedros cited a study commissioned by the Research Foundation of the International Chamber of Commerce, which represents more than 45 million companies in over 100 countries.

“Vaccine nationalism could cost the global economy up to US$9.2 trillion, and almost half of that — US$4.5 trillion — would be incurred in the wealthiest economies,” he said.

The report said that the financial damage of the pandemic in wealthy countries could not be fixed unless the impact of the crisis in developing nations was also addressed, due to the inter-connectivity of economies around the globe.

Tedros said investing in the so-called ACT Accelerator programme, to try to curtail the pandemic on a pooled and equitable basis, was therefore not charity, but simply “economic common sense”.

Tedros said that exactly a year ago, fewer than 1,500 cases of COVID-19 had been reported to the WHO, including just 23 outside of China, where the first clusters of infections were discovered.

More than 2.1 million deaths have been recorded since then.

“Vaccines are giving us hope, which is why every life we lose now is even more tragic. We must take heart, take hope and take action.”

He urged people to stick to the basics of physical distancing, hand washing, avoiding crowds and wearing masks while waiting their turn to get immunised.

Michael Ryan, the WHO’s emergencies director, said only one disease, smallpox, had ever been eradicated, so the availability of vaccines against COVID-19 did not mean the disease could be wiped of the face of the Earth.

“The bar for success is reducing the capacity of this virus to kill, put people in hospital and destroy our economic and social lives,” he said.

Meanwhile Bruce Aylward, the WHO’s ACT Accelerator hub chief, said the goal of vaccination was merely to take the heat out of the pandemic by the end of 2021.

“But it is going to take making some tough choices about how we equitably use and allocate what is, right now, a scarce product — and will be for some months to come.”