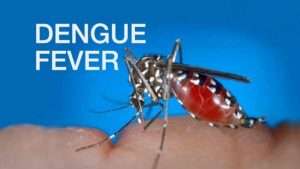 (SEARCHLIGHT) – While most are focused on coronavirus, dengue fever continues to cause illness and even death among residents.

The latest person to succumb to the disease in St Vincent and the Grenadines (SVG) is a 15-year-old asthmatic female who has been recorded as the eighth person to die from complications of severe dengue fever during the current outbreak.

Since the outbreak began last year, the majority of cases have been recorded in persons under 16, with an attack rate of 2.6 per cent in the 5 to 14-year age group.

On Friday October 9, 2020, a 13-year-old third form student of the Girls High School (GHS) Kaylee Robertson, a resident of Belvedere, became the sixth person to die from complications related to Severe Dengue Fever in St Vincent and the Grenadines (SVG).

On November 14, 2020, a 10-year-old girl with an underlying heart condition became the seventh person to die here as a direct result of severe dengue fever.

A release from the Ministry of Health said then that the 10-year-old was admitted to the Milton Cato Memorial Hospital (MCMH) on November 14 and died on Friday, November 20 from severe dengue fever.

According to the National Emergency Management Organization (NEMO), the teenager who died recently was admitted to hospital early in January 2021 with acute dengue fever and a severe allergic drug reaction.

“After remaining stable initially, the teenager developed complications one week ago, deteriorated and died today,” the January 19 release said.

An intensified integrated vector control programme aimed at reducing the mosquito which spreads the dengue virus, and an increased number of fogging teams in all communities in a targeted manner are ongoing to help stem the spread of the virus, the release said.

Symptoms of dengue fever include fever, headache with pain behind the eyes, a rash, abdominal pain, vomiting and bleeding.

Home treatments for the vector-borne disease should focus on reducing the fever by using cool (not cold) baths; paracetamol (not ibuprofen) and maintaining hydration by drinking lots of fluids such as coconut water.

The early and consistent use of the papaya leaf extract for five days in persons with dengue fever symptoms is also encouraged.

The use of mosquito repellent and mosquito nets is also advised to prevent mosquito bites.

Persons are also being reminded to open their homes to allow increased effectiveness of fogging by the Vector Control Unit.