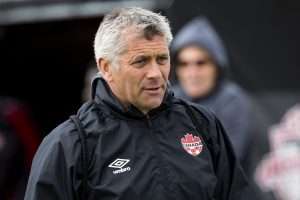 Michael Findlay, who served as the assistant and interim Head Coach of Canada Senior Men’s Team coach has secured the job following the exit of former coach Shalrie Joseph.

Findlay who arrived on the island recently will commence his work following the mandatory quarantine established by the Government of Grenada.

Having held multiple national team positions in his native country which include Canada’s Olympic team, U18, U15 youth teams and Assistant Coach of Canada’s U20 National Team, the Canadian comes with vast experience within Concacaf including FIFA World Cup Qualifying, two Gold Cups and over 150 matches from youth to senior levels.

As Assistant Coach of Canada’s Senior Men’s Team under Spanish coach Benito Floro, Findlay played a key role in the development of the national team’s program including the identification and development of potential players. Findlay joins the GFA from his last position as Director of Football Development for the newly formed Canadian Premier League.

Findlay began his coaching career as a staff coach at the British Columbia Soccer Association which was closely followed by his promotion to Director of Football Development for BC Soccer at which time, he was responsible for all soccer development matters within the region while also being a member of Canada Soccer’s Technical Committee and Long-Term Player Development Working Group.

“I am truly honored and extremely excited about this opportunity with the Grenada Football Association. 2021 provides an exciting time for the Men’s National Team to build on their past successes along with establishing a long-term strategy for Grenada’s growth and success at all levels within Concacaf moving forward” says Findlay. The Canadian will have a busy schedule ahead as Grenada prepares for its FIFA World Cup Qatar 2022 Qualifying matches in March against El Salvador and US Virgin Islands. Grenada will also be preparing for the Concacaf 2021 Gold Cup and Concacaf Nations League tournaments.

In addition to his responsibilities as Senior Men’s Team National Coach, he will be working closely with Technical Director Jerry Alexis on other programs which include coaching certification along with overseeing the coaching of various national youth teams.

Grenada Football Association welcomes Mr. Michael Findlay to our shores and wish him every success in his stint as this island flagship team.

The appointment of the Assistant Senior Men Nation Team coach will soon be announced.