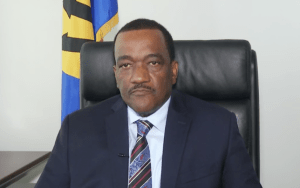 During a televised press conference to update the country on the COVID-19 situation, he said the deceased were two elderly males.

The latest victim was 83 years old.

“Yesterday, an attempt was made to have him booked into a small nursing home in the south of the country, where he would’ve spent approximately an hour and a half before he was taken to the Accident and Emergency Department, where he passed away. Our sincerest condolences are extended to the family and friends of the deceased,” Bostic said.

He stated that while contact tracing was underway at the nursing home, there was no need for people to panic since the level of exposure “would have been limited”, and assured that the situation was being well managed by public health officials.

Meanwhile, investigations into the death of an 84-year-old man, who presented to the Queen Elizabeth Hospital’s Accident and Emergency Department on January 16, have confirmed that he had COVID-19.

“A policy decision has been taken that as long as a person who passes away and had respiratory symptoms, test positive, we would count that as a COVID-19 death. This means we are now at death number nine because the eighth person, which I would’ve mentioned some time ago that is now a COVID-19 death,” Bostic explained.

He pointed out that in relation to the eighth death, 17 primary contacts, identified through contact tracing, were tested, and “16 of those tests came back negative, with one positive, and the positive test has been linked to the West Coast cluster”.

The health minister also gave a summary of the number of tests conducted by the Best-dos Santos Public Health Laboratory, since the emergence of the virus in Barbados. According to him, 93,070 tests had been conducted overall, of which 1,156 were positive.

The health minister also made a fresh appeal for Barbadians to take precautions to reduce their risk of contracting COVID-19, as he expressed concern about the number of positive cases connected to the various clusters that have been identified by public health officials.

“Those positive cases are spread out across the country, and I take it at this time to really reinforce to all persons, even if we have a vaccine tomorrow, no matter what the strain is … the basic principles remain the same, we must continue to protect ourselves….

“The evidence is clear that if we wear a mask when interacting with persons or in public spaces, that significantly reduces the chances of getting COVID-19 …. You need to treat persons as if they have COVID-19, so follow the protocols set out by the Ministry of Health and Wellness,” Bostic stressed, noting that this would greatly aid efforts to contain the spread of the viral illness in Barbados.