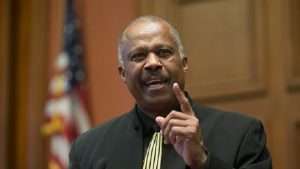 The vice-chancellor of the University of the West Indies (UWI) was recognised for his global advocacy for reparatory justice, equality and economic development for people of the African Diaspora.

The US National Action Network (NAN) presented Sir Hilary with the award at a virtual breakfast on Monday, Martin Luther King Day, as the United States commemorated the life and work of the late civil rights icon.

President and founder of NAN Reverend Al Sharpton said Sir Hilary, who is also President of Universities Caribbean, Chairman of the Caribbean Examinations Council, Chairman of the CARICOM Reparations Commission and Advisor on Sustainable Development to former United Nations Secretary-General Ban Ki-moon, was deserving of the recognition.

“Every year . . . we look for someone who has personified in their own work, in their own life, the global fight for human rights, human dignity, particularly in the African Diaspora. There is no doubt about it that Sir Hilary Beckles has been one in that tradition – I would say unequalled in the present African diaspora of those of us that are still among us,” the civil rights activist said.

This year’s other honouree was world-renowned American physician and immunologist Dr Anthony Fauci, one of the leading experts on infectious diseases, who was honoured with the Lifetime Community Service Award.