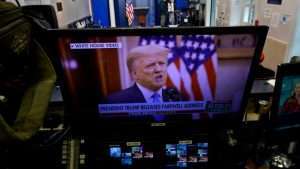 (AP) — US President Donald Trump offered rare, kind words to his successor in a farewell video, while failing to address him by name, as he spent his final full day in office preparing to issue a flurry of pardons in a near-deserted White House, surrounded by an extraordinary security presence outside.

“This week we inaugurate a new administration and pray for its success in keeping America safe and prosperous,” Trump said in the video “farewell address,” released by the White House Tuesday afternoon. “We extend our best wishes. And we also want them to have luck. A very important word.”

Trump, who spent months trying to delegitimise President-elect Joe Biden’s win with baseless allegations of mass voter fraud, referenced the “next administration,” but declined to utter Biden’s name. Many of Trump’s supporters continue to believe the election was stolen from him, even though a long list of judges, Republican state officials and even Trump’s own government have said there is no evidence to support that claim.

Trump was also expected to spend his final hours granting clemency to as many as 100 people, according to two people briefed on the plans. The list of pardons and commutations is expected to include names unfamiliar to the American public — regular people who have spent years languishing in prison — as well as politically connected friends and allies like those he’s pardoned in the past.

Trump spent much of the address trumpeting what he sees as his top achievements, including efforts to normalise relations in the Middle East, the development of coronavirus vaccinations and the creation of a new Space Force.

“We did what we came here to do — and so much more,” he said in the nearly 20-minute address.

Trump has remained largely out of sight since his supporters stormed the Capitol building earlier this month, trying to halt the peaceful transfer of power. Aides had urged him to spend his final days in office participating in a series of legacy-burnishing events. But Trump, who remains consumed with anger and grievance over his election loss, largely refused. He has not been seen in public since last week, when he travelled to Texas for one last photo opportunity at the border wall he pushed so adamantly throughout his presidency. In the end, he spent less than 45 minutes on the ground there and spoke just 21 minutes.

Trump is set to leave Washington early Wednesday morning and has been planning a grand farewell event at nearby Joint Base Andrews. Once there, he will board Air Force One for a final time, flying to Florida and becoming the first outgoing president in more than a century to skip the inauguration of his successor.

Trump has also refused to take part in any of the symbolic passing-of-the-torch traditions that have been the capstones of the peaceful transition of power from one administration to the next. He is boycotting not just the ceremony at the Capitol, but also passed on inviting the Bidens to the White House for a get-to-know-you meeting. And it remains unclear whether he will write Biden a personal welcome letter, like the one he received from former President Obama when he moved in.