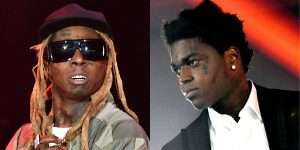 (URBAN ISLANDZ) – Lil Wayne and Kodak Black can breathe a sigh of relief today after Trump granted them clemency.

Outgoing President Donald Trump has pardoned over 150 persons and commutations, sources within the President’s administration has revealed in the early morning of his last day in office. Trump spends his final full day in office- January 19, 2021, finalizing his list of pardons, and it turns out that rappers Lil Wayne and Kodak Black made the list.

According to three CNN news sources, the batch of clemency actions includes white-collar criminals, high-profile rappers, and others but does not include the President, who has been reported as suggesting that he would seek to pardon himself and his children before leaving office. It seems that did not happen after his lawyers advised him against it.

“President Trump granted a full pardon to Dwayne Michael Carter Jr., also known as ‘Lil Wayne,’” White House press secretary Kayleigh McEnany said in a statement to the press. “Mr. Carter pled guilty to possession of a firearm and ammunition by a convicted felon, owing to a conviction over 10 years ago. Brett Berish of Sovereign Brands, who supports a pardon for Mr. Carter, describes him as ‘trustworthy, kind-hearted and generous.’”

“Mr. Carter has exhibited this generosity through commitment to a variety of charities, including donations to research hospitals and a host of foodbanks. Deion Sanders, who also wrote in support of this pardon, calls Mr. Wayne ‘a provider for his family, a friend to many, a man of faith, a natural giver to the less fortunate, a waymaker, [and] a game changer.’”

Lil Wayne was a staunch Trump supporter and ally during his election campaign last year, so it comes as no surprise that he was pardoned by the outgoing President. The full list of names was released to the press at approximately 1 AM on the morning of the inauguration. Lil Wayne was facing a gun charge – possession of firearm during a 2019 search of his jet. The rapper’s jet was searched after landing at the Miami airport, where authorities found what Wayne said was a father’s day gift- a gold plated gun as well as marijuana in his bag.

Weezy remains a controversial personality in hip hop and received heavy backlash, especially from the black community after meeting with Trump and declaring his support for the then President and encouraging African Americans- a key demographic in the contentious 2020 election, to vote for Trump.

Controversial Florida rapper Kodak Black, whose real name is Bill Kapri, was also pardoned after he took to his social media accounts to make an appeal to Trump for a pardon in exchange for donating millions of dollars to charity last year.

“Kodak Black is a prominent artist and community leader,” McEnany said in the statement. “He has served nearly half of his sentence. Before his conviction and after reaching success as a recording artist, Kodak Black became deeply involved in numerous philanthropic efforts. In fact, he has committed to supporting a variety of charitable efforts, such as providing educational resources to students and families of fallen law enforcement officers and the underprivileged. In addition to these efforts, he has paid for the notebooks of school children, provided funding and supplies to daycare centers, provided food for the hungry, and annually provides for underprivileged children during Christmas. Most recently while still incarcerated, Kodak Black donated $50,000 to David Portnoy’s Barstool Fund, which provides funds to small businesses affected by the COVID-19 pandemic. Kodak Black’s only request was that his donation go toward restaurants in his hometown.”

According to one source, the pardon does not come at zero cost as the President is expecting to collect later on his favor. “Everything is a transaction. He likes pardons because it is unilateral. And he likes doing favors for people he thinks will owe him.”

Among the people who received a pardon from Donald Trump include Death Row Records co-founder Michael “Harry O” Harrison, who got his sentence commuted after Snoop Dogg and his allies successfully lobbied the Trump administration.