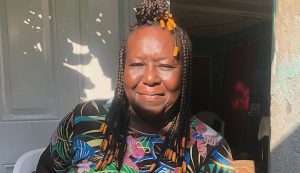 The reggae crooner, whose career dates back to the 1970s, reportedly died in the hospital on Monday morning after she suffered a stroke. It was not that long ago that Sterling was making headlines after the unfortunate flooding at her St. Andrew home during hurricane Eta was highlighted by The Gleaner. Richie Stevens and Pot of Gold Records’ Little Lenny were among those entertainers who set out to assist in the matter. The situation was dire, which gave her advocates the impetus to get her help quickly.

Sterling’s music was very popular among Brazilian fans so together with DJ Waldiney from Brazil, they were able to put together a benefit concert to raise funds for the reggae singer. Weeks later, Sterling revealed to the publication that she was feeling “much better” with her new home and living situation. “I am feeling much better. I just want some studio work now and some performance to uplift myself some more.”

Elsewhere in her final interview, Yvonne Sterling talked about her passion for making music and the studio and the stage being her happy place. “The happiest time in my life really is when I am working in the studio or when I am onstage doing live performances. So these things happening to me now, it’s going to make a big difference in my life, I am not just thinking about the money that I will earn, but I am saying my whole life will be happier,” she said.

Sterling released new music as recently as December 2020, which is when she teamed up with Richie Stevens for the track “Thank You Lord.” The singer shot the music video for the song with Stephens also which has racked up tens of thousands of views since its release on December 26th. Yvonne Sterling is best known for her singles “Oh Jah” and “If You Love Me.” She also had a popular single with Dennis Brown titled “There’s A Reward.”

May she rest in peace.