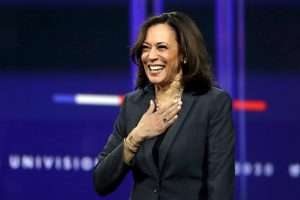 “Those contributions are reflected in the lives of so many Americans with Caribbean roots — from Eric Holder and Colin Powell to Shirley Chisholm,” Harris, the daughter of a Jamaican father and Indian mother, told the star-studded virtual concert that was pioneered by Guyanese-born entrepreneur and advocate, Felicia J Persaud, and presented by Persaud-owned Invest Caribbean and the Caribbean American Action Network, (CAAN).

Persaud is also founder and chief executive officer of Invest Caribbean, the global private sector, investment agency of the Caribbean.Holder, a former US Attorney General, traces his roots to Barbados; Powell, an erstwhile US Secretary of State, is the son of Jamaican immigrants; and the late Chisholm — a former US congresswoman representing Brooklyn, New York, who was the first woman to seek the nomination of a major party (Democratic Party) for US president — was the daughter of Barbadian and Guyanese immigrants.

Senator Harris told viewers that she was “proud to be with you, as a vice-president-elect with roots in the Caribbean”.

“President-elect Joe Biden and I look forward to working with you every step of the way to usher in a brighter future for Caribbean Americans and all Americans,” she said.

“Thank you for the efforts that so many of you have many of you have made throughout the course of the campaign to get us to this moment,” she added. “You did the work. You helped lay the groundwork for this historic occasion. Now, because of you and so many others, our country is on a path to heal and rebuild.”

In her introductory address, Persaud hoped that Harris, “the US’ first Black Caribbean American vice-president, makes it possible for the Caribbean region to take its rightful place as a strong partner with these United States.

“Our challenge to you, dear vice-president-elect, is that you become a fighter for the Caribbean; that you use your Caribbean ancestry and your Caribbean heritage to make a mark in history — and not simply be just another US vice-president,” she added. “Kamala Harris, we celebrate you, but we are also going to be watching you.”

Harris, a former California Attorney General, is expected to officially resign on Monday from her US Senate seat in California, culminating her four-year US Senate career.

US Supreme Court Justice Sonia Sotomayor is expected to swear in Harris on Wednesday as US vice president.