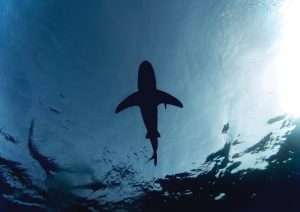 (TT WEATHER CENTER)- Within the past month, two shark attacks in the Leeward Islands with one being fatal, have prompted warnings from governments up and down the Lesser Antilles to be on high alert for sharks.

A shark attack in mid-December claimed the life of a tourist in St. Martin with a new attack reported in the columns of the St. Kitts-Nevis Times , occurred Saturday morning, around Booby Island, an uninhabited island located between St Kitts and Nevis.

According to the account given, the victim – a student at Ross University School of Veterinary Medicine in St. Kitts – was part of a group of kayakers, some of whom bathed when they arrived on the island .

It was then that the victim, a young woman, was bitten and seriously injured in one leg. Taken in by the Coast Guard, she was transported to Nevis Hospital, where she underwent surgery.A link between the two attacks?

It is difficult, for the moment, to establish a correlation between the two attacks. Marine biologists and scientists are currently awaiting returns from the authorities of Saint-Kitts-and-Nevis. The aim is to identify the shark species and size that caused the second event. These elements, along with a photo of the injuries inflicted, could allow biologists to determine if it was the same shark that struck in both cases.

On January 9, the Department of Marine Resources in St Kitts and Nevis issued a statement about an increase in reports of shark and human interactions within its exclusive economic zone. The department has asked persons to be extremely cautious when using the marine environment.

The Government of Montserrat has urged the public, especially those who use the beach for recreational activities to be extremely vigilant as there has been an increase in shark sightings in the Eastern Caribbean. The Ministry of Agriculture, which has responsibility for fisheries posted the notice to their Facebook page.

Grenada’s Government Information Service had a similar advisory, urging caution. “The Fisheries Division of the Ministry of Sports, Culture and the Arts, Fisheries and Cooperatives hereby advise seafarers and the general public to exercise extreme caution in and around the waters of Grenada, Carriacou, and Petite Martinique.”

Similar notices have been issued by the Barbados, St. Lucia, and Dominica‘s governments, though there have not been any shark sightings in the Windward Island region, inclusive of T&T.

Globally, the number of shark bites is on the rise, with a threefold increase since 1982. White sharks, bull sharks and tiger sharks are most commonly responsible.

According to marine experts, sharks tend to be west and south of Tobago as the animals follow their prey and the nutrient-rich currents from the Orinoco Delta. Most of the roaming species, such as tiger and bull sharks, are around from February till May.

The peak season for hammerhead sharks is earlier – from January to March. In most instances, these sharks can be found near the Sisters, two rock islands off Tobago’s North coast. “Schools of up to 40 animals, 10 to 15 feet in length, patrol the area during the daytime”, says biologist and dive guide Johnny Procope. “They’re not dangerous to divers because they’re asleep while they swim. Their hammer-shaped head serves as a radar system for keeping course.”

As a reminder, in case of observation, onboard a boat, it is strongly recommended to: