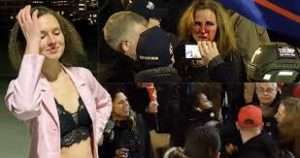 Shortly after thousands of Trump supporters swarmed to Washington, D.C., last week, the 18-year-old Massachusetts woman identified her family members among the violent mob. Duke told Rolling Stone she had heard about the U.S. Capitol riots from a co-worker, but was unaware that her mother, Therese Duke, was among those who attended the Stop the Steal rally.

“I was like, maybe she’s at the Capitol, that would be crazy,” she said. “Then the next morning my cousin sent me the video.”

The video in question showed a pro-Trump crowd harassing a Black security guard outside the Freedom Plaza on Jan. 5, just a day before the Capitol insurrection. The now-viral footage showed Ashanti Smith in her law enforcement uniform as several people in the crowd aggressively got in her face. Seconds later, a woman identified as Therese attempts to grab Smith’s phone, prompting Smith to punch Therese in the face. Though Smith argues she was acting in self-defense, she was ultimately placed on leave and charged with assault.

But Therese wasn’t Duke’s only family member who was spotted in the video. She also shared screenshots of her uncle and aunt, Richard and Anne Lorenz, among the crowd. The latter was also reportedly charged in the incident involving Smith.

Duke claimed she had been kicked out of her home last year after she participated in a Black Lives Matter protest, which her mother referred to as a “violent” cause. Duke also said that shortly after she identified her relatives, her mother had sent her a text accusing her of putting the family at risk.

“I thought it was very inappropriate of her to say my sister would somehow be threatened by my actions,” she said. “I think it’s more her actions who have put us at risk when she decided to go out there and harass this woman … I knew her beliefs and the way she acts,” Duke said. “But I didn’t think she’d stoop this low. It definitely was a realization to me that she’s come to that point in her life.”